Just when we think we have the “Experiment” part eliminated from our event title, we do something new and exciting.  In New York at the Jalopnik office we were presented with something that had never happened in 15 previous events – a tie.  And how we handled that will likely happen again, so we present to you our first “Death Match”.

END_OF_DOCUMENT_TOKEN_TO_BE_REPLACED

In the midst of Manhatten  8 designers will come together in an epic clash of stress, drama and talent to compete for the title of Sketchmaster at the inaugural Sketchbattle Pro New York thanks to the support of Jalopnik and Gizmodo Media.  There are fewer than 20 tickets left so get them fast at Jalopnik’s website or ours. 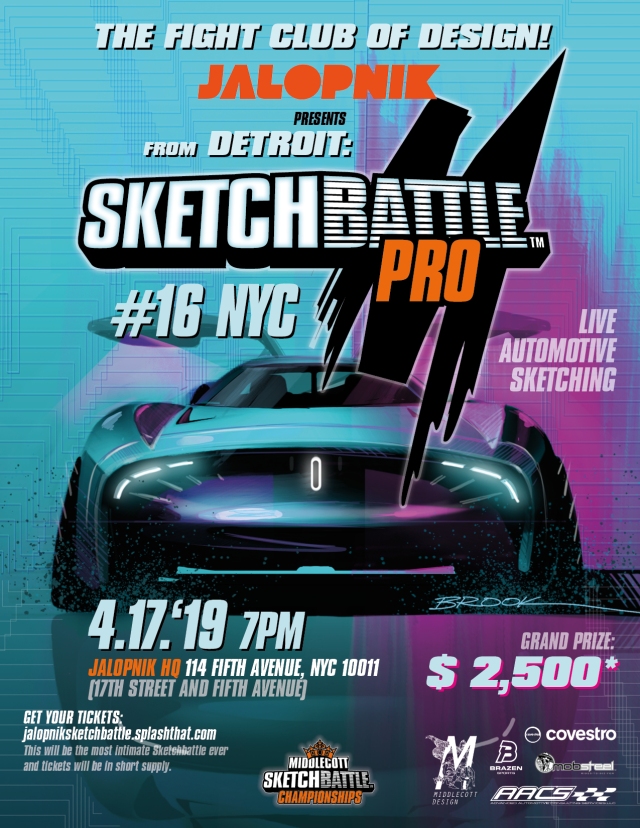 END_OF_DOCUMENT_TOKEN_TO_BE_REPLACED

We are pleased and proud to announce our first Sketchbattle Pro event in New York City timed to coincide with the New York Auto Show.  Can the news get any better than that?  How about we are doing the event in Jalopnik’s swanky Headquarters (full disclosure, never been there, have no idea if it is swanky or not, but you don’t either so let’s just run with it).  Details are below as well as a list of our contestants (which will be updated daily as we add new sketchers daily until full)….

END_OF_DOCUMENT_TOKEN_TO_BE_REPLACED

Will Autonomous Vehicles cause accidents?

Recently I participated in AV19 Silicon Valley, the Autonomous Vehicles conference held annually on the west coast.  As the moderator of the closing panel on Industry Standards and Governmental Regulations, I had a chance to pose questions on the future of safety to Walter Stockwell, Director of Safety Policy at Starsky Robotics and Bert Kaufman, Head of Corporate and Regulatory Affairs at Zoox.  And while the 3 days of Workshops, Presentations and Panel Discussions clearly proved that self-driving vehicles will save countless lives, the question of “overall safety” kept popping up in my mind.  More on that point later, here are a few things that were presented that may be of interest. 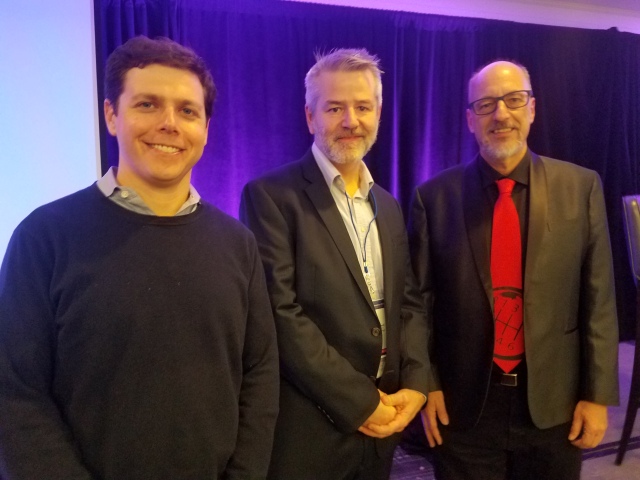 END_OF_DOCUMENT_TOKEN_TO_BE_REPLACED

What does Motorsports have to do with Business?

So why is a post about racing on our business page?  Because at AACS, our business is built around the lessons learned from 39 years of participating in Motorsports activities.  While many may consider Motorsports a hobby, it is at the core of what we do.  Our team attacks your business development objectives with the same passion we attack turn 1 at Indianapolis (where we went from 28th to 14th after the drop of the green flag).  We have participated at many different levels of Motorsports, from autocrossing, to road rallyes, to track days, ending up wheel-to-wheel racing with the country’s top talents.  And the results speak for themselves; our winning percentage of more than 1 out of every 3 events, with a podium finish almost 70% of the time is almost unheard of in the sport.  So here are the lessons that drive our passion as we work on your Business Development activities, or as I prefer to say “Everything I know about Business, I learned from Racing”.

END_OF_DOCUMENT_TOKEN_TO_BE_REPLACED

If you have any question that Detroit is the center of the automotive design universe, Sketchbattle 15 should alleviate your doubts.  More than 600 people, a mix of automotive designers, engineers, suppliers, Detroit-area businesses, the local arts community,  automotive enthusiasts, media and even Michigan Legislators, came together to celebrate design as a talent as the newest Sketchmaster was crowned.  Before we give you a rundown of the rounds and the winner, let us take you through the activities of the evening from beginning to end…..

END_OF_DOCUMENT_TOKEN_TO_BE_REPLACED

The Detroit and Cleveland Shows are Now Related

The following is an editorial and does not represent the opinion of any of our clients – the views expressed are mine and mine alone.  The Cleveland Auto Show has a new brother, the Detroit Auto Show.  I can no longer call it the North American International Auto Show because a) it is no longer truly international and b) it really doesn’t even represent North America that well either.  Does all that sound a bit harsh?  I don’t think so.  To understand my opinion you should at least understand my point of view, so please read on……. 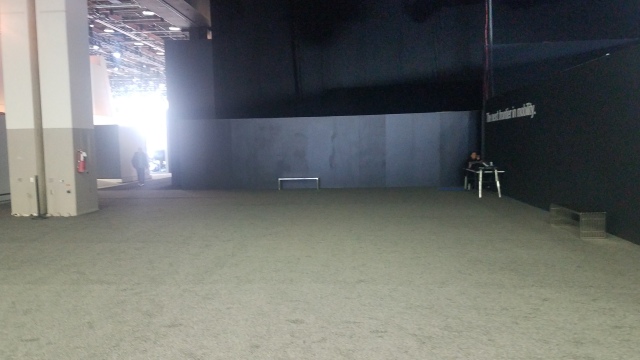 END_OF_DOCUMENT_TOKEN_TO_BE_REPLACED

Here are your Themes for Sketchbattle 15

With the countdown clock under 12 hours, and tickets flying out the door, it is a great time to review the themes for the 3 rounds of tonight’s epic clash of design titans.  We are not billed as “The Fight Club of Design” for nothing – come watch designer’s egos get bloody as they sketch live.  Tickets are available for a pre-event discount price until NOON today at http://www.sketchbattles.com. 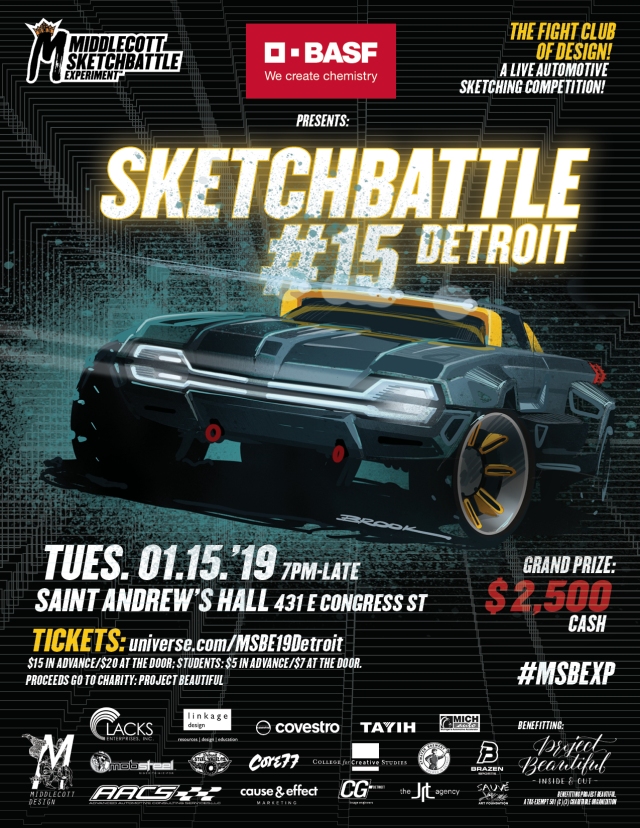 END_OF_DOCUMENT_TOKEN_TO_BE_REPLACED

What’s in the Basement – Sketchbattle 15

At Sketchbattle 12, the basement of St. Andrew’s was basically empty and used only for coat check.  What a difference a year makes.  For Sketchbattle 15 the famous Shelter, where Eminem had rap battles in the movie 8 Mile, is a hot bed of its own activity.  Auction items for charity Project Beautiful will be joined by an Art Show of epic talent as the bar is open make The Shelter the perfect place to spend the down-time between rounds.

END_OF_DOCUMENT_TOKEN_TO_BE_REPLACED

Meet the Judges for Sketchbattle 15

Professional and student designers will be fighting to the death for the title of World Champion Sketchmaster when Sketchbattle 15 presented by BASF returns to its home in Detroit.  The “Fight Club of Design” party has visited multiple cities including Las Vegas, Los Angeles and San Francisco since its inception in 2012.  This event, the 15th in the series, features a live sketching competition, great music and an art show on Tuesday, January 15th from 7-midnight at world famous Saint Andrew’s Hall.  Over the years the event has been judged by a unique cross-industry of experts and design luminaries such as Camilo Pardo, Ralph Gilles of FCA, Doyle Letson of Ford, Bregt Ectors of GM and many others.  The panel gets to choose who receives the $2500 top prize by BASF.  For Detroit 2019, Helen Emsley of GM will be the Chief Judge, and will be joined by Ryan Nagode of FCA, Jeff Hammoud of Rivian and Adam Rabinowitz of Calty Toyota, along with guest judge Paul Czornij of BASF each themed round. 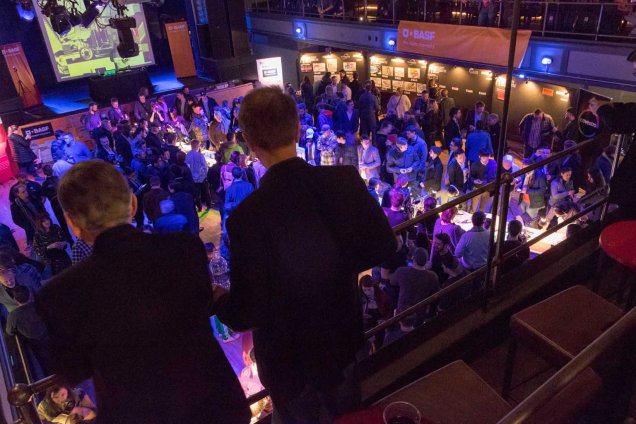 END_OF_DOCUMENT_TOKEN_TO_BE_REPLACED

Posted in Uncategorized | Leave a comment
thesupplierblog
Blog at WordPress.com.