Detroit is the Auto Design Center of the World, and Las Vegas is the Boxing Capital of the World.  Put them together and what do you get? THE Fight Club of Design! Ring Announcer Jake Gutierrez, who introduced Floyd Mayweather in his first professional match, kicked the evening off by announcing the amateur and professional sketchers who were contestants in the first ever Middlecott Sketchbattle Experiment to take place in the state of Nevada.   Read on to meet the contestants at SEMA ….. When we asked Beto about himself, he was tight lipped.  He response was simple, he is from Mexico City, stands around 5-5ish tall and his real name is “Roberoto Martinez but you can use my short name as Beto Marz”

Cesar Estrada is also from Mexico, and currently works for Airdesign and Sparco.  He went to school at Scuola Politecnica di Design Milan SPD, stands 5’8″ tall and is 192 pounds.  You can see examples of his work on Estrada’s instagram here.

Our third contestant is Chris Greazel who attended the University of San Diego High School. He moved north to study Illustration and Engineering courses at California State University, Fullerton and then on to Product and Transportation Design at Art Center College of Design in Pasadena.  Greazel now has his own design firm, named appropriately enough Greazel Design.  You can see Greazel’s portfolio here.

Chris Lah was the competitions only Korean-American from Queens NY.  With a  height of 5’7″ and weight of 135 lbs.  Lah is a student at the Art Center College of Design, and you can see examples of Lah’s work at Behance.

Daney Chhang is from Dallas TX and has previously worked for Faraday Future.  He went to school at Art Center College of Design and stands 5’6″ tall and weighs 155 lbs.  Chhang currently does freelance work through his design firm Daney Chhang Designs.

Henry Pu is also a student at Art Center but we do not have any additional information. 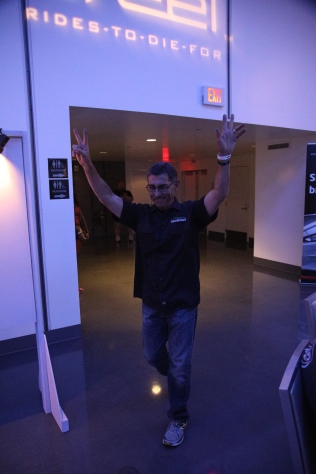 The second contestant from Texas, John Narciso made sure to emulate the Astros during his introduction walk.  Standing 5’8″ tall and weighing in at an even 200 lbs, Narciso attended school at Art Center and currently works for  TSW/Black Rhino Hard Alloys.  You can see examples of Narcisco’s work here.

The only former winner in the field, Jose Omar Gonzalez Torres was the Detroit 2016 Champion.  Gonzalez is from Monterrey and currently attends school at Art Center at Night in Pasadena.  Gonzalez is 5’10”  and weighs 155 lbs.  If bonus points were awarded to the entry walk, Gonzalez would be the perennial winner.  Above you can see a quick image of his dancing skills, which match his sketching skills.  See a video here.

Justin Famularo is a contestant with a busy background.  Owner of an aftermarket wheel business Joy Performance, doing freelance design and working for startup Rivian automotive barely left enough time to travel to Las Vegas and participant in the competition.  Famularo attended school at the College for Creative Studies in Detroit and stands 5′ 6 7/8″ tall and weighs 135 lbs.  You can see examples of Famularo’s work here.

K-ONE was not the only contestant with a cool nick name, but his was the best. Kayvan Naderi is from Los Angeles, was also a student of Art Center and currently works for Scenario Cockram USA Inc.   Naderi claims to be a Music lover / Coffee drinker / Explorer. “I naturally observe the spaces we live in, the products we use and want to make them better.” K-ONE stands 5’9″ tall and weighs in at 160 lbs.  You can see Naderi’s portfolio here.

Matt Torres is the second competitor to attend high school in San Diego, in this case he was Del Norte High School Class of 1979, however he is currently from Albuquerque NM.  Torres is 5’11” and 180 lbs. and is the owner of TNT Promotions, the promoter of Nationally recognized Classic and Specialty Automotive Events like The Supernationals Custom Auto Show.  Torres had our favorite quote of the competition “I Did My Best Artwork In English Class”

Ryan Goimarac – aka THE GUY or Anthony Stark is originally from Colombia but presently living in Rochester, MI.  He is 6′ tall and weighs 180 lbs. and graduated from the College for Creative Studies  in 2015.  He is currently emplyed by FiatChrysler Automobiles and is an Automotive Design teacher at the Drive One Academy in Roseville, MI.  You can see examples of Goimarac’c work here.

The second best contestant nickname was Xander, aka Xinhan Wang . Wang is originally from China and stands 5’9″ tall and weighs 180 lbs.  A student at Art Center, you can see some of Wang’s work here.

As is usual at out-of-town events, family issues and travel problems occasionally cause a competitor to miss the event.  In this case we had two last minute entrants take those open spaces.

First up was Michael DiTullo, owner of Michael DiTullo Design.  DiTullo was a judge at last year’s Los Angeles competition, and wanted to try his hand at competing.  The competition includes the best-of-the-best so we couldn’t really say no.  Since we didn’t have a tape measure or scales on hand, we will let DiTullo slide on his height and weight.  Considering the sketches we have seen he easily qualifies in the heavyweight division.

Last but not least is out walk-on competitor Del Swanson. As a walk-on, we don’t have much information on Swanson, other than he works for Round Six Podcast, but will update the page as soon as we do.

COME BACK TOMORROW TO SEE THE RESULTS