There is no doubt that the auto industry is in the midst of a slow but steady recovery.  The analysts are saying it, the people working inside the industry are saying it, and anyone with their eyes open can see it for themselves.  But the things that come with a recovery are not all positive.  Too many are quick to return to the old habits, and since a higher tide floats all boats, sales increases are often attributed to personal success and not the fact that everyone has sales increases.  Such was this year,s North American International Auto Show in Detroit – it seemed every manufacturer claimed or implied their sales increases were due to having better products than their competitors.  Unfortunately, this cannot be true in every case……. 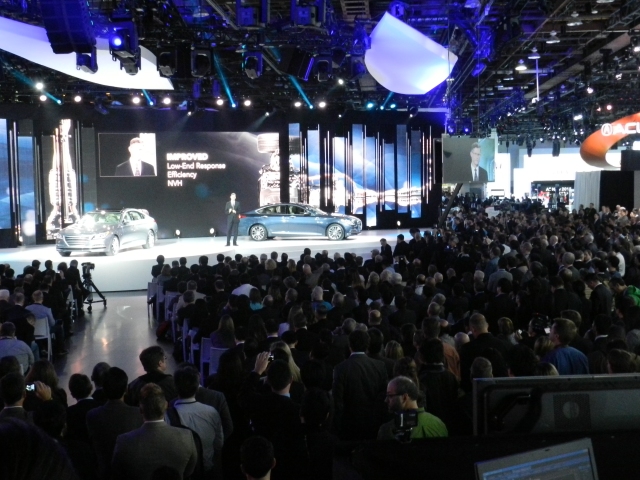 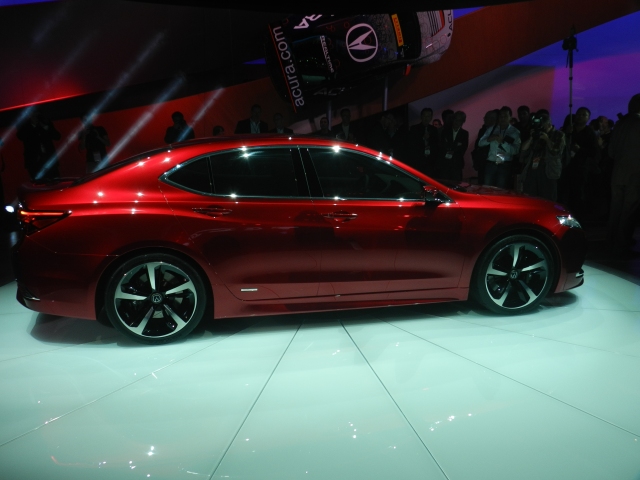 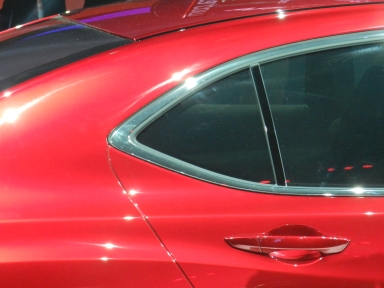 Perhaps the most ironic line in the auto show circus was uttered during the TSX Prototype press conference “you will experience a nimble and solid ride”.  I heard one journalist mutter under his breath  “How?  there’s no interior”.

Acura claims they are the “Clean up hitter for luxury brands” since Lexus, Infiniti and Cadillac had their conferences first.

If so only Cadillac appears to be on base in Detroit with their ATS Coupe.  If I were to buy an Acura, this would be it – but I have no interest in Acura and it appears I am not alone.  Their best selling model in 2013 sold only 24k units.

The real problem is that Acura is still trying to figure out who they want to be.  The press conference was full of conflicting terms like “isolation” and “rush”.  Polling some designer friends after the reveal – the response was pretty much unanimous – best Acura yet, still a ways to go.  I say take the accolades, weak as they are, and keep at it.  Unlike many other brands you are at least heading in the right direction.

It seems no one will admit they don’t like Audi design.  But lately there might be a break in the wall of silence.  Perhaps it is because what was once years ahead of it’s competitors has gotten conservative, or perhaps the pace of change is too slow.  It doesn’t matter which is correct, while Audi’s cars and SUVs are still attractive, they are suddenly eliciting comments like “meh”.  I heard no oohs or ahhs about the Q3. Perhaps it looks too much like a baby Q5. 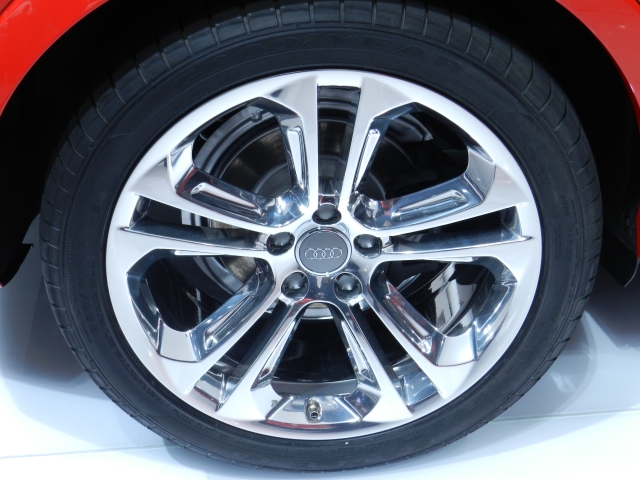 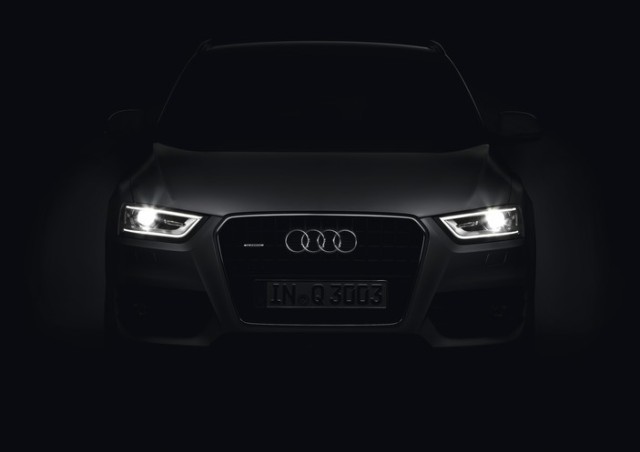 One thing that hasn’t changed? Audi still has some of the best headlamps and wheels in the industry. 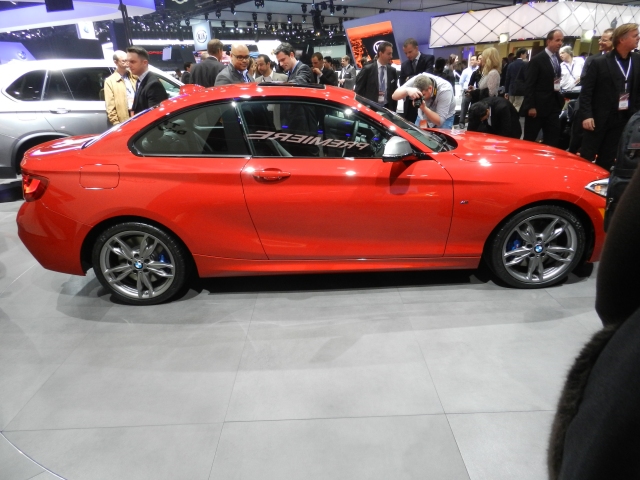 BMW has been chasing the 2002 and this 2-door, rear-wheel-drive, 3-box coupe comes close on paper.  The comparison is interesting, approximately 8″ longer, 8″ wider and an extra 1,000lbs in weight provides a sleeker design and substantial upgrades to safety equipment and creature comforts (I used to own a 2002 and it was sparse to say the least).  Performance is substantially better too as the lowest trim level 220i carries around 17 lb/hp while the 2002 carried an extra 4 pounds for each and every pony.  Still, given the choice I would rather have a 2002tii.

From a design perspective the cars have much more in common than you would think – both are massively under-tired!  Seriously though, much like Audi, the shape is pleasing, but it seems the bloom is off the rose.  Maybe the 2-Series shouldn’t have been parked next the the M3 and M4 – during my time in the booth hardly anybody noticed it. 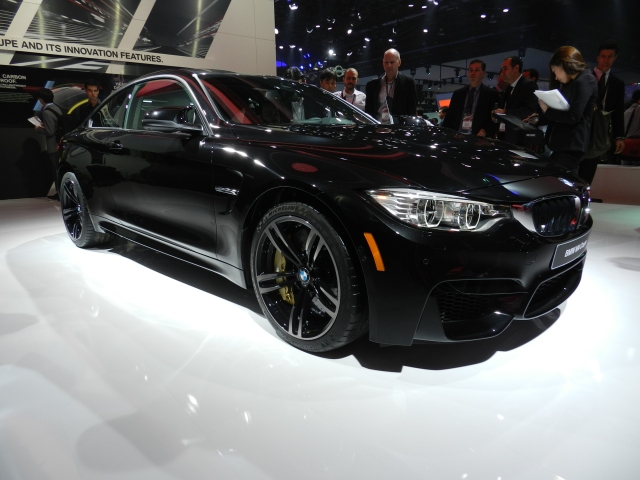 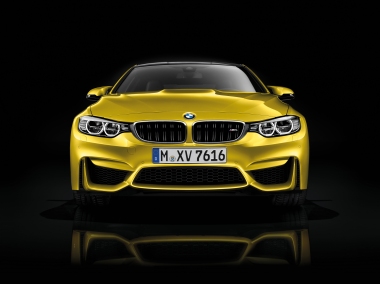 And yes, I want one.

The regular 3- and 4-Series are attractive cars and make a great canvas for the M-mods. Up front an obligatory new fascia incorporates huge chin air intakes.

At the rear a subtle diffuser and quad exhaust.

The M4 Coupe and M3 Sedan approach rear downforce from a different angle.

The Sedan gets a gurney-shaped decklid and Coupe gets an integrated spoiler.

Of course weight savings abound with CFRP (carbon-fiber reinforced plastic) roof panels that also lower the center of gravity.  The Coupe also gets a CFRP Decklid to contribute additional savings. 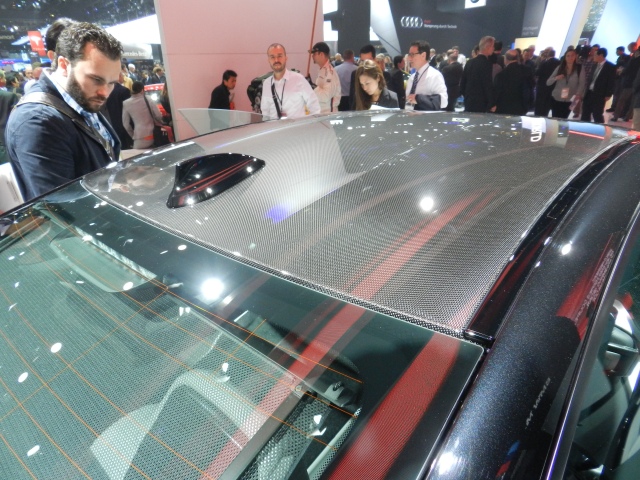 The interior is more luxury than track, with premium materials and beautiful shapes.

The ATS Coupe is intended to be”lighter, more agile and more engaging than its competitors”.  It is also really good looking.  For me the CTS Coupe proportions don’t work as well – the ATS Coupe looks like a much tighter design, almost as if it was designed alongside the sedan instead of afterwards (perhaps it was).  Compared to the sedan with which it shares wheelbase, the Coupe gets its own specific roof, doors, rear fenders and trunk lid.  Cadillac also spent a lot of time talking about its new Crest which is “longer, lower and wider”.   Trivia question of the day:  “How many times has Cadillac changed the crest in its 110-year history?”  Answer at the end.

PS In my opinion Cadillac has the best lighting signature of all domestic brands and is second worldwide only to Audi.   The design team has done an excellent job working with suppliers to demonstrate the essence of the Cadillac brand and communicate it at night. The thin vertical appearance of both the headlamps and taillamps is not only pleasing, it is instantly identifiable as Cadillac.  Well done team! 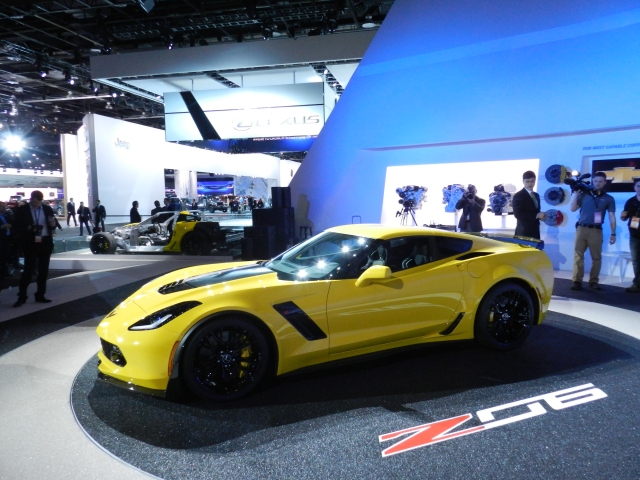 The Corvette Press Conference was a prime example of loving a company and what they have accomplished with a car, but hating the marketing gobbledigook they spew at the press conference.  Mark Reuss claimed that the Z06 is the “only car in the US that offers more than 600HP and a choice of 2 transmissions“.  Was that really necessary?  Why not just claim it is the fastest car in the world with “06” in the name. 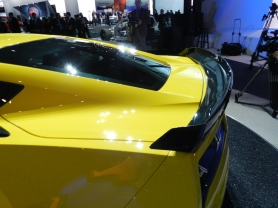 The desire for hyperbole undercuts the accomplishment:

This is probably the easiest/fastest track car in the world at any price. 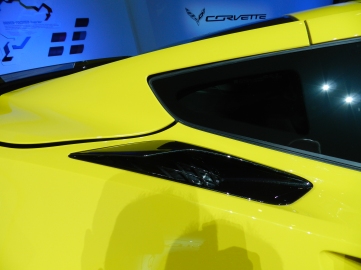 Now the only question is :

And, as if the Z06 isn’t enough to capture you heart, there is the C7R, The Big Nasty! 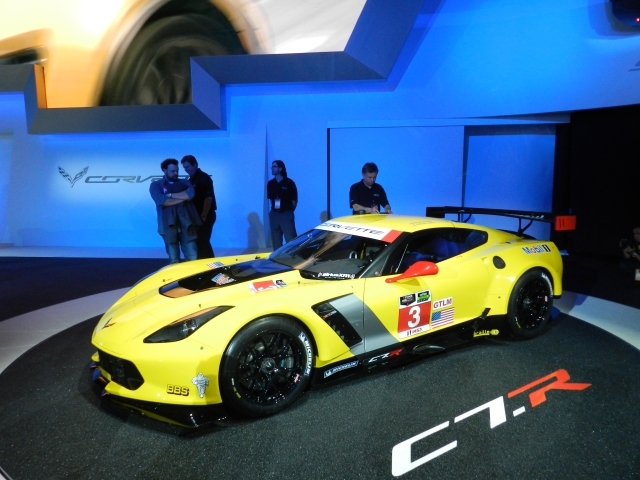 Like Rodney Dangerfield, it seems Chrysler just can’t get any respect.  At the Eyes of Design Awards on Monday night the new 200 did not seem to get any serious considerations.  Which is a huge shame because this is a nice package.  Al Gardner, CEO and President of  the Chrysler brand claimed that the goal was “not just compete, but trump the competition”.  I don’t know if they trumped everyone but the they trumped almost everyone – something no one would have guessed a few years ago.

I am not sure if that was accomplished, but the car is stunning both outside and inside.  The interior is especially beautiful, with wood veneers inspired by Eames Chairs and nice premium finishes throughout.

Normally, we are not fans of automatics and the idea of a rotary dial would be repulsive, but the packaging benefits here clearly have changed our mind.

In our opinion this car has the best integration of power supplies for accessories in the world. 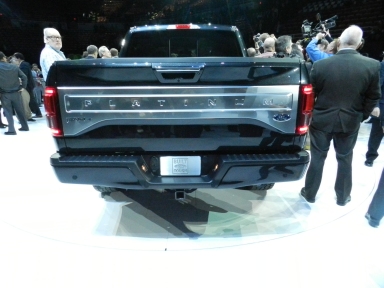 The new 2015 F-150 was our choice as the most significant vehicle of the show.  It was also Green, especially if you consider the 700 pound weight reduction, start/stop technology and new 2.7 Liter Ecoboost® engine.  So, if you want to read more, please visit Green Car Design 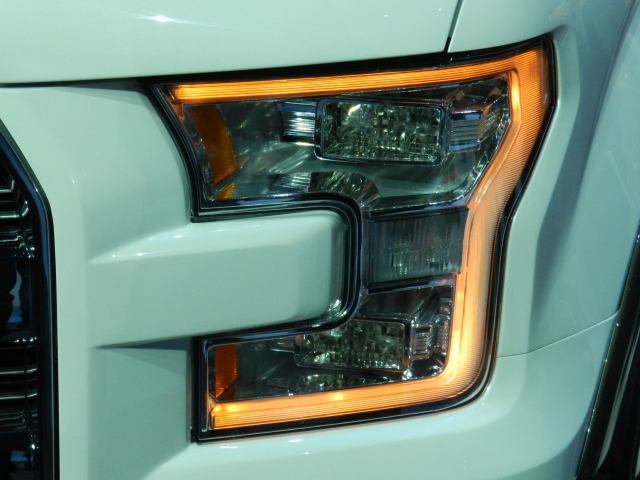 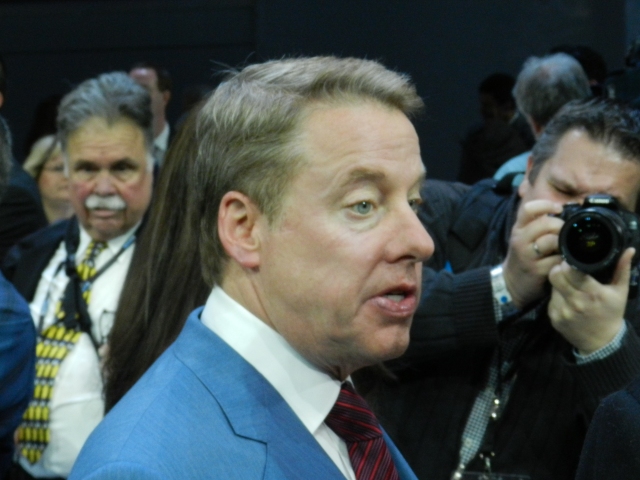 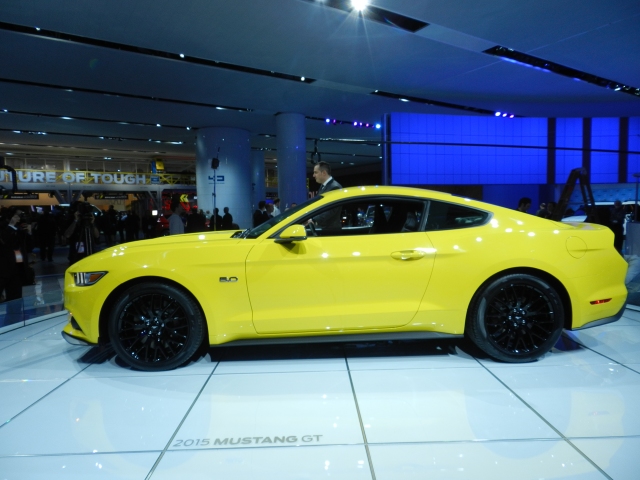 Ford Motor Company had the same problem this year that General Motors did last year (Silverado/Corvette).  How do you introduce your two most important products at the same time?  It appears all they did different was flip the order, but it seemed to work.  I did not hear anyone comment negatively on the process and both vehicles got their fair share of attention.

The pictures that were released last month do not properly convey the impact this car has when you see it for the first time.  In some photos it appeared bloated and heavy – not so in person.  Many of my designer friends have criticized the headlamps as being too narrow.  I think they are just right and I love that they brought the 3 vertical bar theme in from the taillamps. 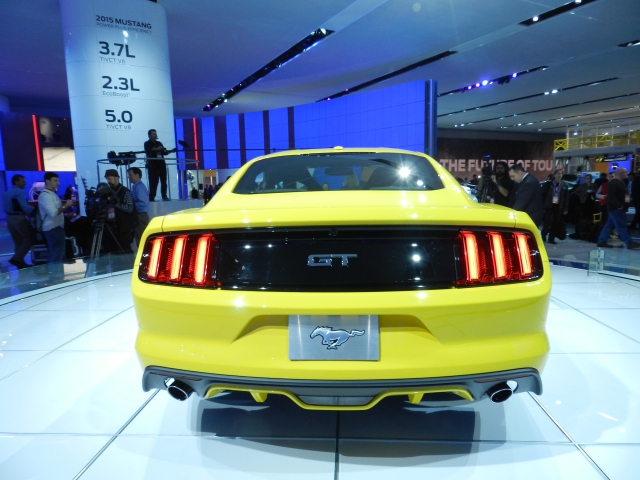 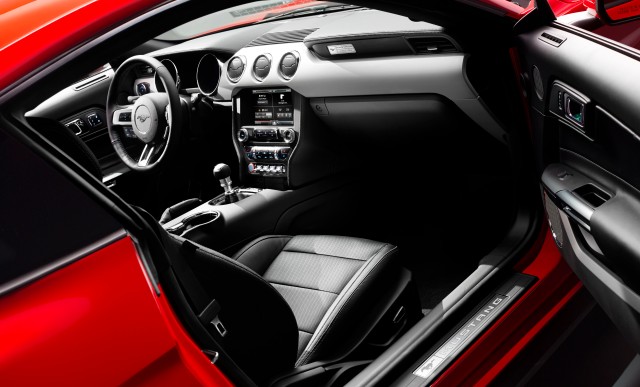 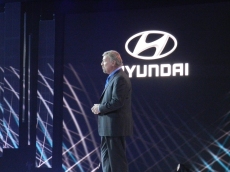 It was strange for me to see a Hyundai press conference without John Krafcik – surreal is probably a better description.  Either way, the new Genesis is Hyundai’s first car to demonstrate the new Fluidic Sculpture 2.0 design language.  Per the press release, expect the theme to be further expanded with the new Sonata coming later this year.  2.0 means “more refined and precise presentation”. 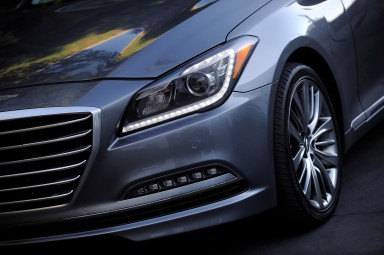 Perhaps the most noticeable element from FS2.0 is the new hexagonal grille that “stands up proudly”.  The proportions seem to be improved from the last version.  Dash to axle now clearly conveys a rear wheel drive platform.  In general, a handsome if somewhat uninteresting car.

On the down side the booth was so poorly lit we had a hard time getting decent interior shots with our antiquated camera.  Again, it was nice but nothing special – and isn’t “special” what you want in this category?  By the way, the new Genesis is the first vehicle in the world with an interior CO2 monitor.  Touted as a safety system (“Hyundai engineers discovered that occupants start to get drowsy when CO2 levels reached more than 2,000 parts per million”) the jury is out if other manufacturers will follow suit. 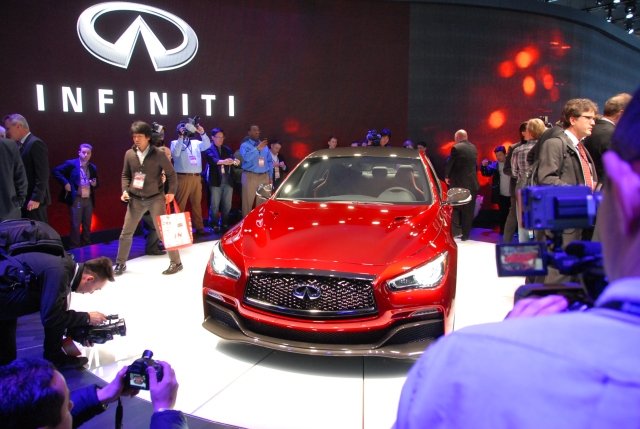 The Q50 is not new, having been introduced at this show last year.  The Eau Rouge is an attempt tp improve the performance marketing of the brand by generating a closer tie between its Red Bull Formula 1 sponsorship and the general public.  Unfortunately, while it has worked elsewhere in the world, Eau Rouge is a rather unknown term to the US consumer.  Personally, I consider naming a car for a corner where a famous driver lost his life in poor taste.  And I was so hopeful after last year’s

To quote Kia, this was their “most aggressive concept car ever”.  To quote other designers, this was a knock-off of the Audi R8.  I can see a little of what they are talking about, but to me it does a good job of carving out a new part of the market for Kia.  I hope they build it, because I believe they will come.

Come back tomorrow for Part II – Lexus through Volvo

Trivia Answer:  Cadillac has changed its crest 38 times in its 110-year history.

PS – Last week we worked a few extra hours (me personally = 107 hours) so please excuse the one-week delay in filing this report.  Obviously, being the first to report about the shows is not our forte.  What we try to do is provide an alternative view to the standard media outlets.  We are not beholding to advertisers, stock prices or even our personal relationships in the industry.  I may not be a designer, but I love design, so the views expressed above are only this one-person’s opinions with the ultimate goal of encouraging automakers to not make any boring cars!