Yesterday we covered half the vehicles at the 2013 Los Angeles Auto Show; Acura – Lincoln.  Today we cover the other half from Mercedes to Youabian.  What’s a Youabian you ask – read through to the end to find out. 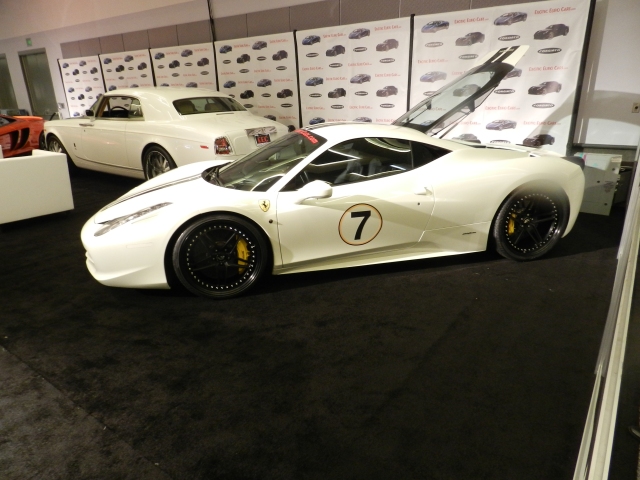 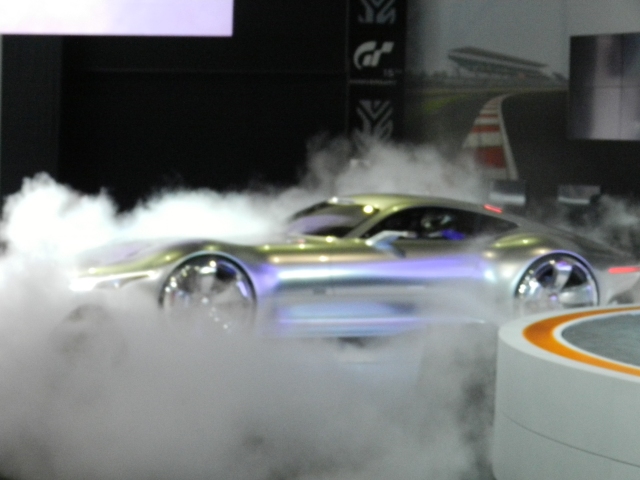 Kazunori Yamauchi, right, enjoys the AMG Gran Turismo Vision Concept.  Not sure who the other guy is.

Even though we got a chance to see this concept in video form before the show, its impact in person changed our opinion from “Nice” to “OMG”.  Easily the star of the show!  The only shame was that is was a non-running buck with an incomplete interior – including a top half of a racing driver.  Nothing can prepare you for the stance of the concept.  It is long, low, wide and looks like the wheels and engine were covered with stretchwrap.  Many of the designer friends I discussed the show with expressed disappointment – they said it doesn’t carry any Mercedes DNA.  My opinion is that it is the first spiritual successor to the W196 Streamliner.  And as a nice bonus to the video game geeks in attendence, Kazunori Yamauchi, gentleman racer, CEO of Polyphony and producer of the Gran Turismo franchise attended the unveiling.  Want one?  One outfit plans to re-body the SLS with a carbon fibre replica of the Vision. 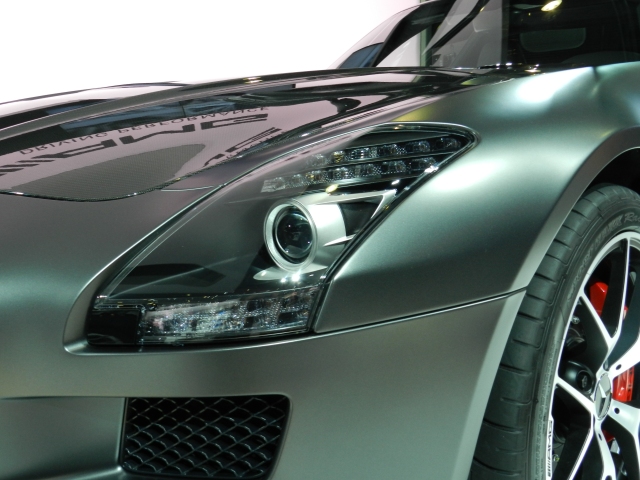 The SLS has reached the end of the line.  And to give everyone a last chance to buy one, what better than a Last Edition.  There are no mechanical upgrade but the model does feature aero enhancements like new splitter and fixed rear wing plus weight savings like a carbon fiber hood.  Want one?  Get your order in quick as there will be only 350 available worldwide – Coupe or Roadster.

Do you earn in the millions and need a rocket to get to work?  Then the AMG S65 is the perfect V12-engined bi-turbocharged 600+ horsepower sleigh. aside from the normal AMG upgrades under the hood and in the drivetrain, the exterior has a new fascia that has some of the largest lower grilles around. 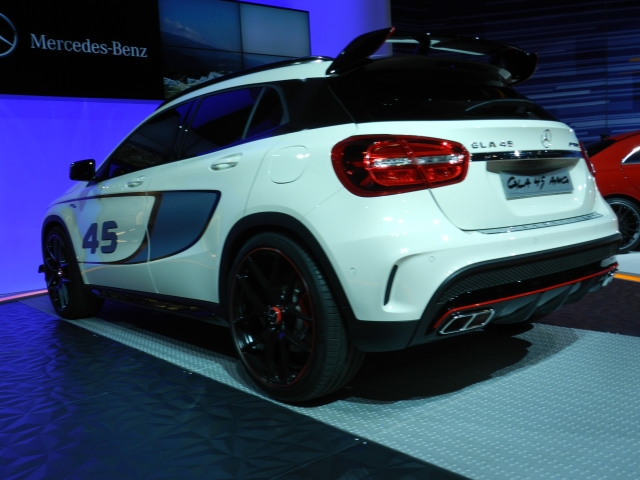 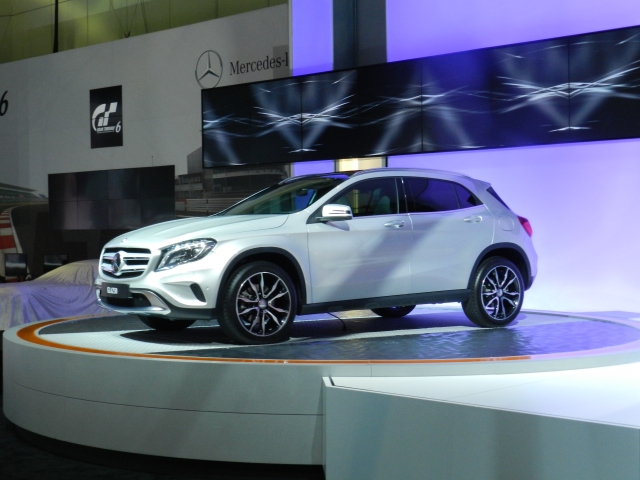 Mercedes introduced the production GLA at the Frankfurt show back in September and used Los Angeles to debut an AMG variant – albeit a concept.  The concept shares the powertrain of the CLA AMG which means more than 350 horsepower and 0-60 in less than 5 seconds.  We are not sure which features on the concept make it to production, but we are pulling for the massive rear wing. 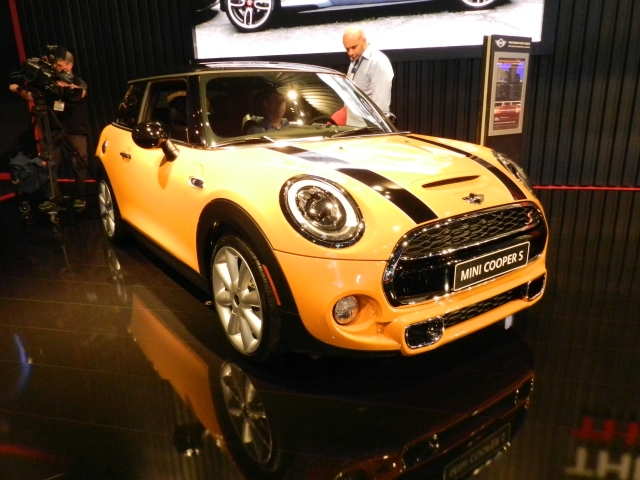 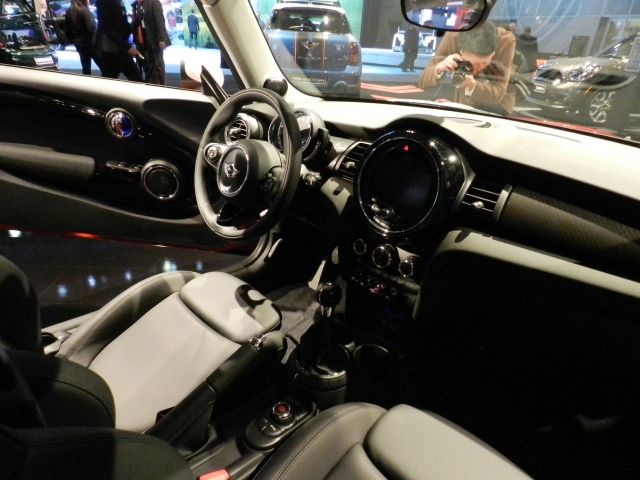 The third generation of the new Mini was unveiled in LA and the media response so far has been tepid at best.  Many of us were hoping for a smaller version, more along the line of the Rocketman Concept.  During the press announcements Mini emphasized some of the changes the newest version has incorporated.  The speedo is back in front of the driver and the window switches are back in the door panels “where they belong”.  Sorry Mini – you lost me with this one.

This one hits me personally as I was a big fan of the new Mini.  After the majority of the early teething problems were ironed out I purchased a 2004 model .  Over the past 9 years it has packed on almost 200,000 miles.  It was without question the BEST car I have ever owned.  So this fall when it came time to buy a new car I considered another Mini.  But the 2nd Gen had grown too much and lost some of the mojo so I ended up with something else.  As you can see from the image above, the 3rd Gen is even fatter.  So bring back the mini in Mini and watch the flocks return. 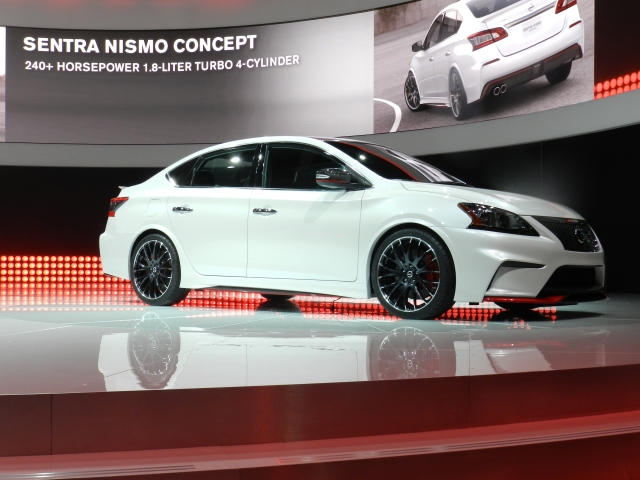 Instead of having a report on what Nissan is up to, this press conference was all about NISMO.  First, there was Usain Bolt, Nissan’s new Director of Excitement, on hand to introduce the Nissan GT-R NISMO.  Then we were treated to the Juke NISMO RS.  And finally the Sentra NISMO concept came on stage.  Along with the suspension upgrades, there are new fascias, spoilers, wings and Recaro seats to hold you in place while you explore the 240 horsepower.

Topless pleasure doesn’t come any more fun that this 560 horsepower beast.  Just remember that fun isn’t free, as the $160k starting price will unfortunately limit sales to people outside my friend circle. 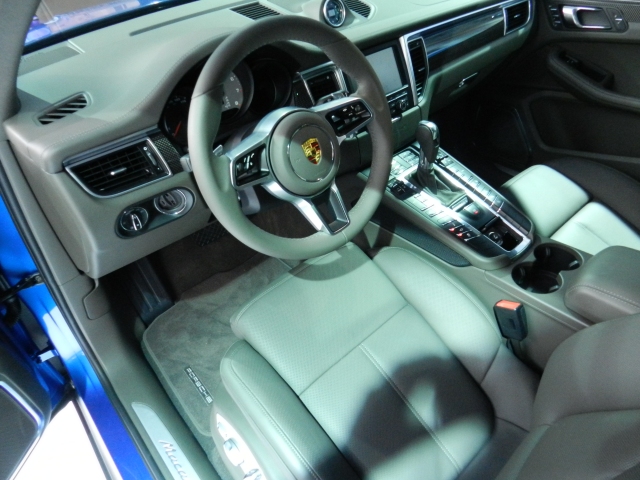 Don’t want all the fancy wings and spoilers of the Mercedes GLA AMG but still need an SUV that covers 0-60 in about 5 seconds?  Then the new Macan is likely the leading choice.  With 340 horsepower in the base model and 400 in the S, the driving dynamics should be very un-SUV like.  The interior is nice, with the exception of the ridiculous number of switches on the center console that everybody seems to be so upset about.  While the styling is typical Porsche SUV fare, the rear end is especially attractive and unlike any other SUV on the road. 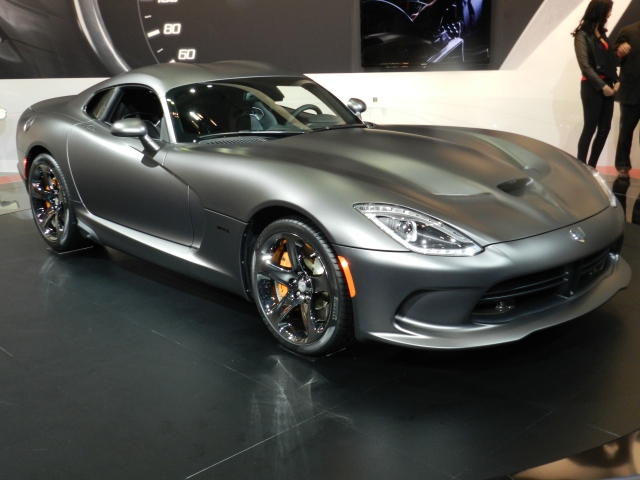 Normally, we wouldn’t spend much time describing a special edition that only offers a special finish.  But this Viper is special and the matte finish is quite awesome. 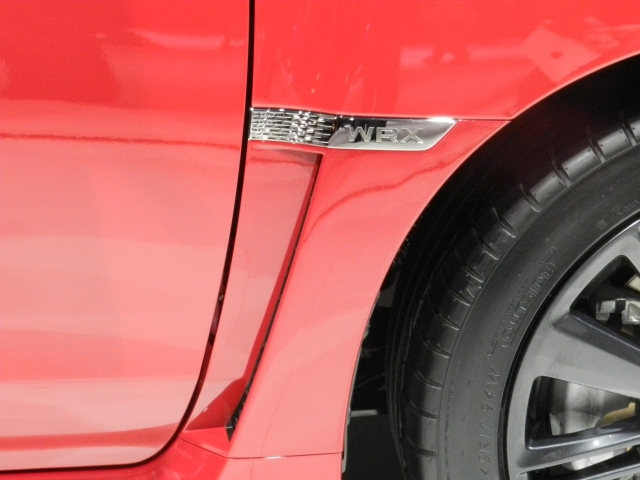 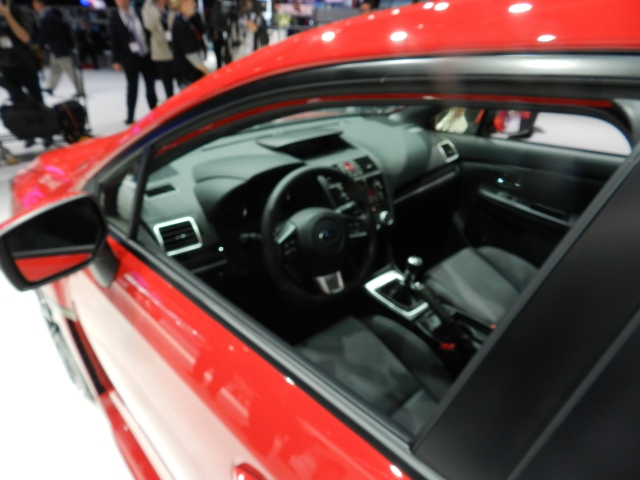 We can’t quite make up our mind which is the bigger disappointment: the new Mini or the new WRX.  The return to a sedan bodystyle could have been exciting but this shape and surfaces offer no excitement at all.  Even the oversized hood scoop looks woefully out-of-place.  Inside there is a noticeable improvement in materials, a welcome change.  In the end this is a car that should be exciting but the end result is just another econobox with all wheel drive and some extra horsepower. 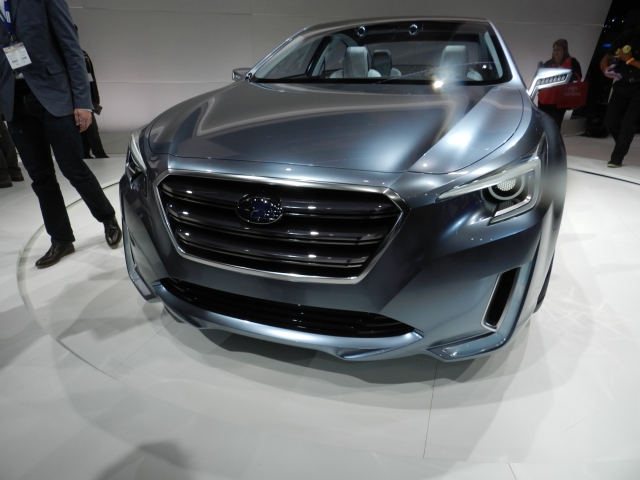 As bad as the WRX was, the Legacy Concept was so attractive you wondered how the same company could show both at the same time.  This concept looks good from pretty much every angle, but the coupe-like proportions really show up in the side view.  The front pairs a trapezoidal upper grille with C-Clamp shaped headlamps and the muscular front fenders help complete an aggressive package.  Now we just have to see if the production model follows this form or deteriorates into like the Impreza Concept to the WRX.

The Mark VII Golg-based GTi was introduced this year at the New York Auto Show but since we weren’t there, this was our first chance to see it in person. 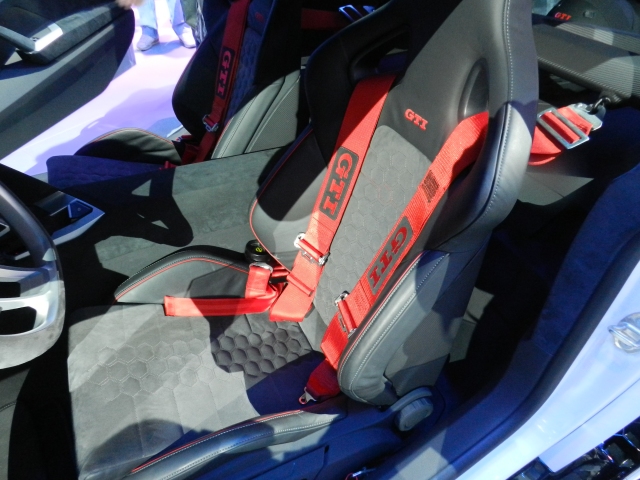 It seems calling a concept Vision ensures it makes our list of top vehicles.  If the Mercedes AMG Vision was the best in show, this Vision from Volkswagen was a close second.  First shown at the annual Wörthersee festival in Reifnitz, Austria, this is another concept that looks even better in person than any pictures lead you to believe.  Lower and wider than a production GTi, the concept is actually a bit shorter.  Underneath beats a 500+ horsepower 3.0 liter VR6 coupled with a DSG transmission and all wheel drive.  I think this should be the next R32! 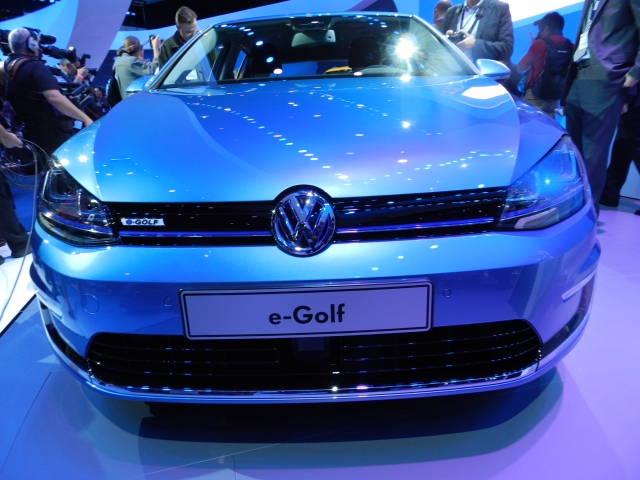 Volkswagen’s first US electric vehicle was on the stand in Los Angeles.  Unlike their competitors, Volkswagen expressed the desire to make the eGolf virtually indistinguishable from its gasoline powered brethren.  The goal is to not lose the VW brand and meet the expectations of their buyers.  In fact, the only real clue that this was a different Golf (aside from the decals on the doors) was the blue stripe in the grille; Volkswagen’s signature for its electric vehicles. 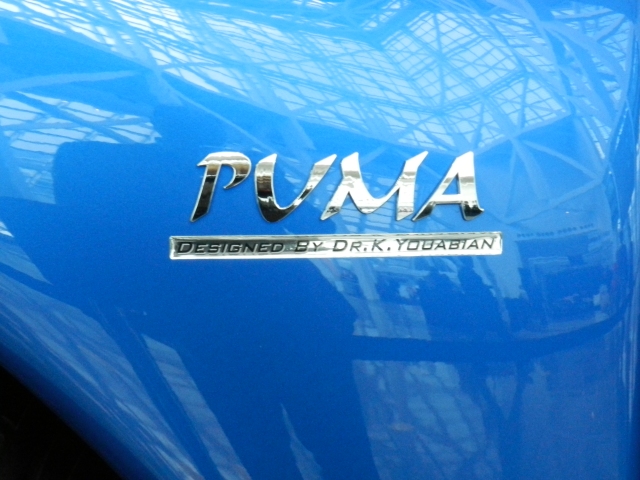 This monster vehicle was the brainchild of Dr. Kambiz Youabian, a plastic surgeon from Los Angeles.  Words cannot describe how ugly this vehicle is in person.  The feelings it brings up are akin to the feelings you get when you unexpectedly see a spider.  Defenseless or not, you just want to step on it.  Be forewarned, if you buy one I will immediately un-friend you on facebook.  No questions asked.