Thanks to the folks at K1 Speed in Torrance we had a much better night of race management.  And thanks to some observant racers we intervened before the races started with the wrong groupings.  So on evening number two, BMW Designworks and General Motors 5350 Design Studio came to Torrance to join Honda Research and Development, Tesla Design and Toyota Product Planning and find the fastest Design Studio in the West.

This is probably a good time to remind everyone the goal and purpose of the evening is to bring automotive designers together for an evening of competition and camaraderie.  And I say good point because as I was sitting in my kart ready to go out for my race I watched a faster driver try to overtake lapped traffic and promptly get put into the wall hard.  I do not know if it was on purpose or not, but certainly it looked painful.  Had I been able to contact race management the other driver would certainly been black-flagged. 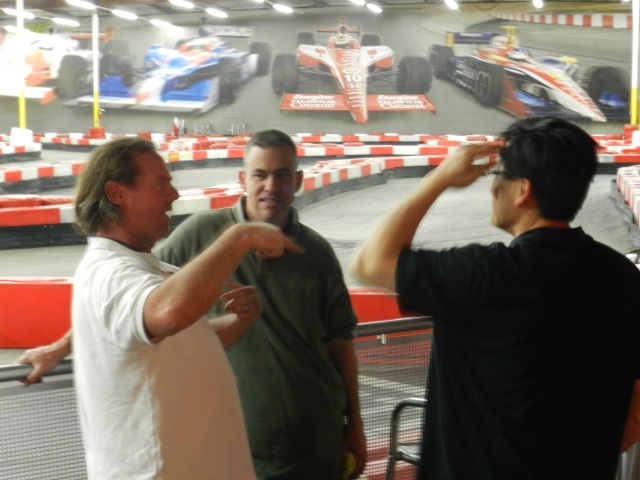 So please remember, their are no professional scouts in the stands and the trophies are not that nice – if you really, really want one they are offered for sale for $10 at the counter.

Torrance turned out to a larger event than Thousand Oaks as 32 drivers competed for themselves and their studios for bragging rights.  In the C-Main it was a tight race as James Lee from Honda barely edged Jeff Chiu of Lacks, margin of victory less than 1 and a half seconds.   Evan Keitley of Tesla was third as three different teams filled the podium. 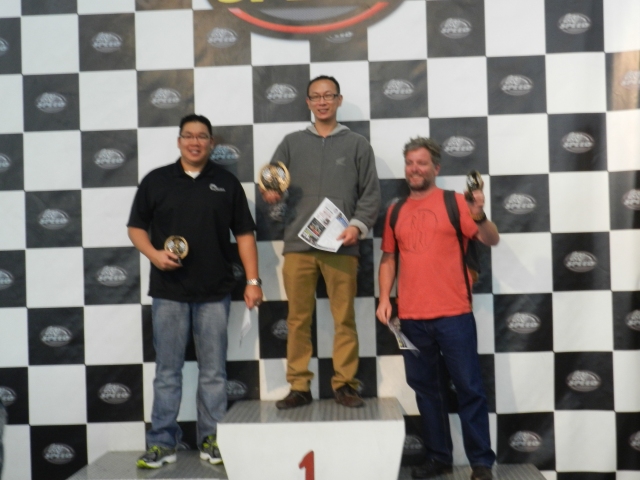 The B-Main was the only “clean” race of the evening.  I say “clean” because although there were spins, there were no full track stoppages to remove karts from the tire barriers.  It was an even closer result than the C-Main as Rudy Carruolo of Honda barely beat Chris Bao of Tesla for the top podium spot.  David Randle of Bunkspeed and Bernard Lee of Tesla also had a close battle with Randle coming out on top in the end.

The A-Main was the closest and perhaps most exciting race of the evening as Sue Neuhauser of Tesla ran rampant through the field.  Neuhauser started last but was the class of the field and caught the eventual winner on the last lap for a well-deserved 2nd place finish.  Had the race been a couple of laps longer she most certainly would have won.  Cullen Quantock of GM started on the pole but was hounded by yours truly for a couple of laps before being passed between turns 3 and 4.  Quantock eventually finished third for his second podium in two nights.

Based on their finishing positions, Sue and Cullen were invited back by Bunkspeed to represent Tesla and GM and join Hyundai, Kia, Calty, Ford,Mazda and Nissan on night three of the week’s races.  The fastest lap of the evening was a 23.045 by Cullen.

At the end of the evening BMW Designworks maintained their lead as the Sponsors moved into second place due to their A-Main ein.  Honda Research and Development moved past General Motors into third place and Tesla overtook Volvo for fifth.

DESIGNER NIGHT at the RACES POINTS – as of Tuesday April 9th

Toyota/Calty’s last place position will definitely change tomorrow as the 2012 Defending Champions are sure to bring out the big guns to K1 Speed in Irvine.

A full list of results and points can be found here.

Pictures will be posted here as soon as they are available.

Frank Schwartz is the founder of CarFriend.me and Advanced Automotive Consulting Services, partner in The Middlecott Sketchbattle Experiment and serial entrepeneur. A long time automotive enthusiast, Frank started reading car magazines at the age of 8 and has spent 30+ years working inside the automotive industry. In his spare time Frank races with the Sports Car Club of America, spends time working on his numerous project cars and supports many local charities.
View all posts by Frank Schwartz →
This entry was posted in Designer Night at the Races and tagged Bunkspeed, Designer Night at the Races, Lacks Enterprises, Middlecott Design, Purple Platypus. Bookmark the permalink.