I cannot begin to tell you how much I missed going to SEMA in Vegas two weeks ago.  And  no, that is not a comment about how much I love cars, car parts, horsepower or gambling.  It’s a comment about missing seeing some old friends who it seems I only run into at SEMA.  So there was no way I was going to miss the LA Show this week, because my friends who live in sunny California never seem to visit Detroit.  Must be the weather. So without further delay, let’s start with a picture from the walkway between the South and West Halls.  Skip to the end if you want to see which car it is talking about.

Probably one of the most interesting things to happen at the LA Auto Show was the fact that both Ford and Honda introduced their sales leader crossovers one right after the other.  First up was Ford, which brought its new Kuga-based Escape.  The 2013 Escape becomes more car-like sharing its front end appearance with the Focus instead of the other crossovers and SUVs like the Edge and Expedition.  I am not sure if the new look will resonate with consumers, but the women I saw at the show couldn’t get enough of the automatic liftgate that can be activated with a wave of the foot.  And yes, I realize that is a sexist comment but honestly, the men that were watching the demonstration just seemed amused while the women were ecstatic. 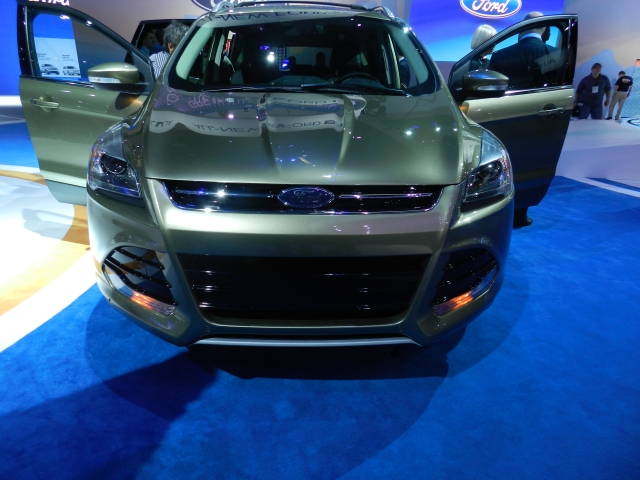 If the Escape is now more European looking, then Honda’s new CR-V is definitely getting more American looking.  If I had asked you all to bet money on which future crossover would have more chrome I don’t think a single person would have bet on the 2012 CR-V over the Escape!  Yet Honda must feel pretty confident about the new design because they announced that it will be manufactured in 4 different plants around the country.  It will be interesting to see which of the two consumers choose in the next year or two.  I am going to maintain my neutrality…..for now.

The Cadillac booth was one of the busiest ones around as they debuted the new XTS.  Many articles have been written that the XTS is designed to compete directly against the likes of the Audi A6, BMW 5-Series and Mercedes E-Class.  But those cars are actually CTS sized so I am a little confused with the strategy.  Maybe its a 2-pronged approach, pay the same and get the bigger XTS or get the same size and pay less with the CTS.  In the end it doesn’t matter, the XTS will certainly find plenty of buyers.  It is easily the best looking Cadillac Sedan to date and the team at GM have done a great job with the car.  As if to prove the excitement at the show about the car, it was the hardest one to get a picture of without people blocking my shot.  I had to return to the booth several times during the day to get these shots.

Cadillac also showed the 2014 ELR, their luxury coupe version of the more “mundane” Chevrolet Volt.  The ELR addresses a question I have been posing for years, do electric vehicles need a grille?  Apparently they do, even if there is no airflow to the radiator required.  It does confuse me a bit as I have been in so many meetings with auto designers where they harp to no end on the need to be “authentic” in their use of materials.  So what do you call spending the money to install a grille on a car that doesn’t need one?  It brings to mind this quote from Shakespeare, “God has given you one face, and you make yourself another”.   It doesn’t matter as it’s another sharp effort from the design group, even if I had no problem getting pictures.

The third new car in the Cadillac booth was the Ciel Concept.  Now technically this wasn’t a new car as it has been shown at more than one car show before Los Angeles.  But for whatever reason, this was the first time I saw it in person and I was suitably impressed.  In fact, it was my favorite car at the show.  I totally understand why a national news correspondent asked a local TV anchor on air to ask GM to please build it- it is THAT special. 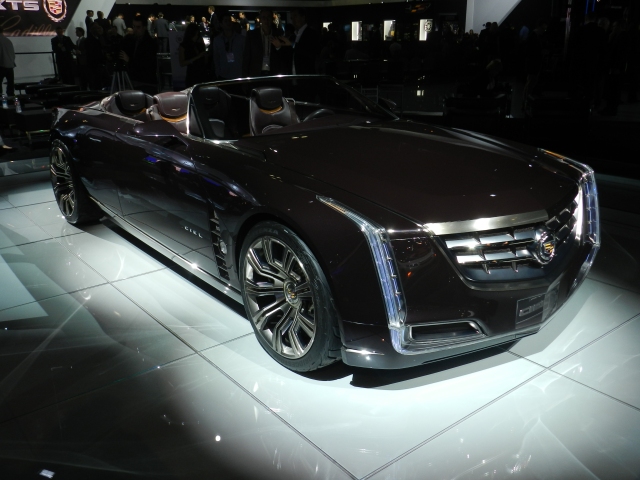 My most major disappointment from the show was actually a surprise.  Volkswagen showed its new CC and to be honest I think they lost something in the update.  Whereas the former evoked mostly the same feeling as when I first say the Mercedes CLS (it’s not a real car, its like a sketch come to life), the new one left me feeling a bit empty.  I cannot quite put my finger on it which is perhaps why I am not a designer.  But in the end I think I can spot good design (which comes not from a natural talent, but from hanging around so many designers at the Designer Night at the Races™ events), and this isn’t it.

Hyundai continued its product offensive (should I be using the word ‘assault’ here?) with the new Azera.  Hyundai seems to be introducing a new production vehicle at every major auto show (needless hyperbole).  OK, maybe not every show but you cannot argue that they are introducing new and redesigned vehicles a bit faster than most of their competitors.  The Azera slots in between the Sonata and Genesis and features Hyundai’s “Fluidic Sculpture” design language.  Whatever you call it, they have certainly carved out their own piece of real estate in the market. 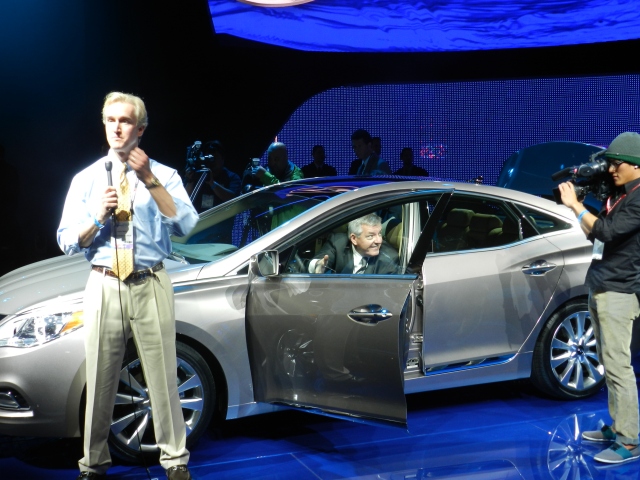 And yes, those were Azera signs in the lobby.  What does Exuberantly Rational mean anyways? 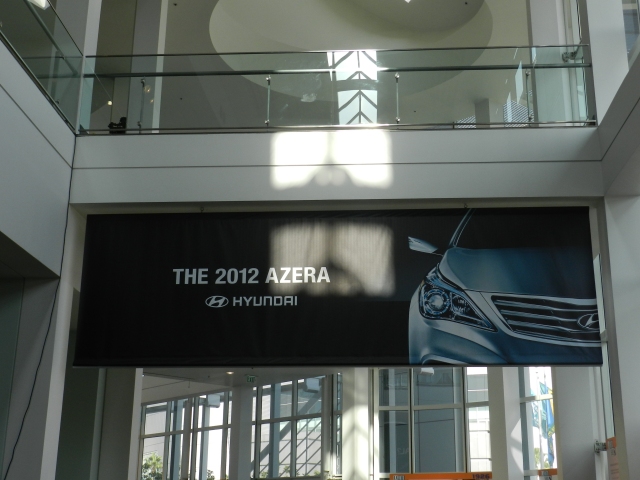 Come back tomorrow when we get a chance to review the Subaru and Scion twins, The Infiniti JX, The Buick Verano and Lacrosse GL and the Lincoln MKT.  And if you want to read about the other cars that were showm, please see my reports from the Frankfurt show for the Porsche 911, Land Rover DC100, Jaguar CX-16 and Mercedes M-Class.

Frank Schwartz is the founder of CarFriend.me and Advanced Automotive Consulting Services, partner in The Middlecott Sketchbattle Experiment and serial entrepeneur. A long time automotive enthusiast, Frank started reading car magazines at the age of 8 and has spent 30+ years working inside the automotive industry. In his spare time Frank races with the Sports Car Club of America, spends time working on his numerous project cars and supports many local charities.
View all posts by Frank Schwartz →
This entry was posted in On The Road and tagged 2011 LA Auto Show, Cadillac Ciel, Cadillac ELR, Cadillac XTS, Ford Escape, Honda CR-V, Hyundai Azera, LA Auto Show, Volkswagen CC. Bookmark the permalink.