A Story About a Boy and His Car Part 2

In the last post we told the ending of the story.  Today we get to talk about the beginning.  Murray Pfaff is an award winning designer from Detroit who started with a 1975 Chevy Caprice that he and his brother restored.  During that process he realized he wanted to modify it and from there it was a short ride to automotive stardom.  If you visit his site (click here), you may go blind reading about all the cars he has designed.  All the way back in 2004 they were featuring his renderings for show cars and hot rods – the Imperial Speedster is his latest creation.

The story starts with a drawing, as all of Murray’s creations do.  Pfaff has an interesting business, if you are going to invest thousands and thousands in a hot rod or custom car he will provide photo-realistic renderings up front so you can decide on the end result before you cut the first fender or buy the first gallon of paint.  Murray’s Imperial Speedster rendering was a “what if” look at a luxury Chrysler sports car, a sleek, sexy roadster that could have come straight from the drawing board of Virgil Exner.  A couple of weeks after the rendering was done fate stepped in.  As he was visiting his parents in northern New York, his father noticed the sketches and mentioned that he knew a guy who had an old Chrysler in a building.  Murray figured the old Chrysler was probably an 80’s K-car or maybe if he was lucky a mid-70’s Cordoba.  There was no way it was going to be the same 1959 Imperial his sketch was based on. 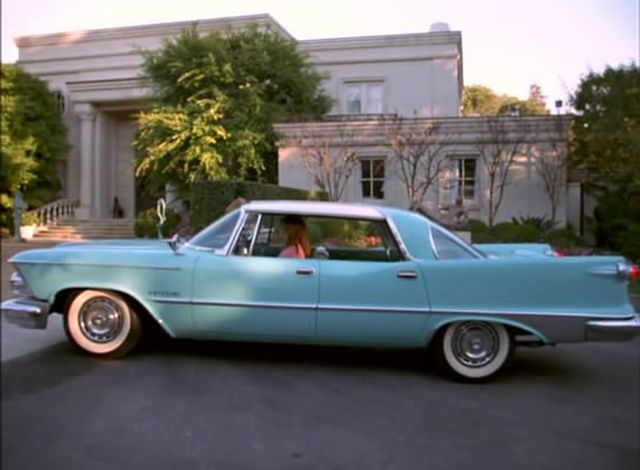 Fate (or perhaps its karma) has a funny way of showing up when you least expect it.  After a short drive to Sackets Harbor, he and his father found the neglected carriage house that is tilting so far that the doors are wedged shut.  Murray says “It almost seemed like we were raiding a tomb”.  After unbolting the doors to the shed (because they were wedged shut) they found a large 50’s or 60’s car covered with a blue tarp and sinking into the wooden floor.  Under further investigation it was unbelievable to find that it was indeed, the exact 1959 Imperial Crown Custom 4-door sedan he based his concept on.  All the more amazing considering it was almost 50 years later and there were only just over 17,000 originally built.

It was a sign from somewhere that Murray was intended to build this car.  After some back and forth the car was his and soon after the build process started.  The sketches showed a 2 seat speedster based on a large 4 door sedan so the primary build objective was removing mass.  In the end the cut-down body required almost 50 cuts and the resultant body was 8 inches narrower and 52 inches shorter.  Murray did not accomplish this job alone – a legion of friends were there to help during the 3 and a half years it took to complete the car.

The car is not just show, there is also plenty of go.  Under the hood is a 6.1 liter Mopar SRT HEMI crate motor which puts out 425 horsepower.  Backing up that monster is a Model PT 518 SS automatic w/overdrive.  And the fun doesn’t stop in the engine compartment.  An independent front suspension and a rear from a Viper.

In the end The Imperial Speedster took over 10,000 hours to build, fusing modern technology and classic styling.  (Here is a great video of it on Woodward).  All of the details of the original four-door Imperial are still there, just in a much more attractive package.  But the story is as much about people as it is about the car. The most remarkable fact?  Murray says  “Amazingly every guy who started in on the project saw it through to the end”.  Now THAT is passion.

Frank Schwartz is the founder of CarFriend.me and Advanced Automotive Consulting Services, partner in The Middlecott Sketchbattle Experiment and serial entrepeneur. A long time automotive enthusiast, Frank started reading car magazines at the age of 8 and has spent 30+ years working inside the automotive industry. In his spare time Frank races with the Sports Car Club of America, spends time working on his numerous project cars and supports many local charities.
View all posts by Frank Schwartz →
This entry was posted in On The Road and tagged Muscle Cars at the Mansion, Pfaff Designs, The Playboy Mansion. Bookmark the permalink.