A Story About a Boy and His Car Part 1

This week I am going to head off on a little tangent and tell you a story.  And while it may seem like I have abandoned the reporting of design trends and fashion, in reality the theme that runs through all our posts here remains intact.  It’s all about the passion; the passion we have for what we do, the passion we have for the people we surround ourselves with, the passion for giving back to the community and perhaps most clearly, our shared passion for the automobile.  And that is the perfect segue-way for me to tell you a story about a boy and his car.  But unlike most stories, I am going to start with the ending and come back tomorrow to give you the buildup.  PS The hyperlinks included in my blog posts are mine and not paid advertisements – check them out to learn more. 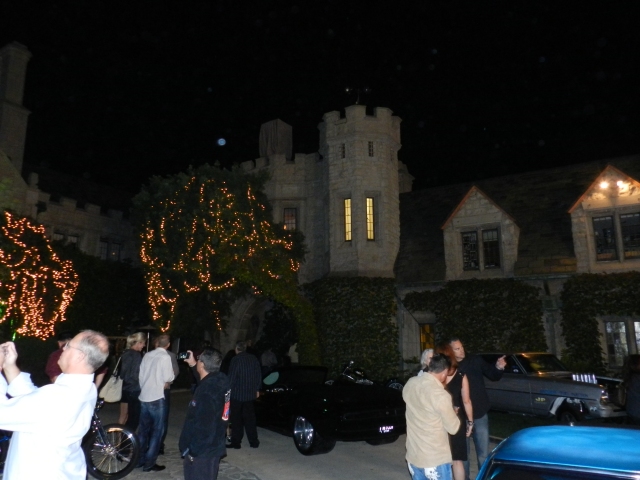 The setting for our Happy Ending (no pun intended) is a private enclave in the Holmby Hills area just outside of Beverly Hills.  Unfortunately the location’s owner does not figure in our story, but at least he was gracious enough to lend us some secondary characters (our protagonist, however, figures pretty heavily in the story – read on).  Passion, a wonderful setting and a protagonist are not enough to make a great story, you also need plot twists, a fantastic event, and emotions like empathy, desire and conflict.  This story has them in spades.  In case you haven’t figured it our yet, the location was The Playboy Mansion and the (fantastic) event was Muscle Cars at the Mansion.  For those unfamiliar with the event, it is a small car show with a big heart (here’s the empathy part) as it benefits Its All About the Kids.

Our protagonist is not a boy like I so casually mentioned above, but “A Man and His Car” might not have caught your attention, so excuse me for taking artistic license.  Murray Pfaff is a graduate of Syracuse University and is definitely a man – but his eyes belie a boy’s optimistic view of the world – like a kid in a candy store. Cliche or not, Murray had a dream (here’s the desire part), a dream to build a most unusual car, a “what if” look at a luxury Chrysler sports car.  And this dream was not born of his mastery of fabrication, for Murray is a Designer.  He has openly admitted he did not start this project with all the skills necessary to plan and complete it (aha – there’s the conflict), they were developed as the project progressed – and he had tons of help from friends (insert more characters here).

We will get into the 3 and a half years of work that led up to the this night in tomorrow’s post, but first let’s talk a little about the cars and bikes at Muscle Cars at the Mansion. 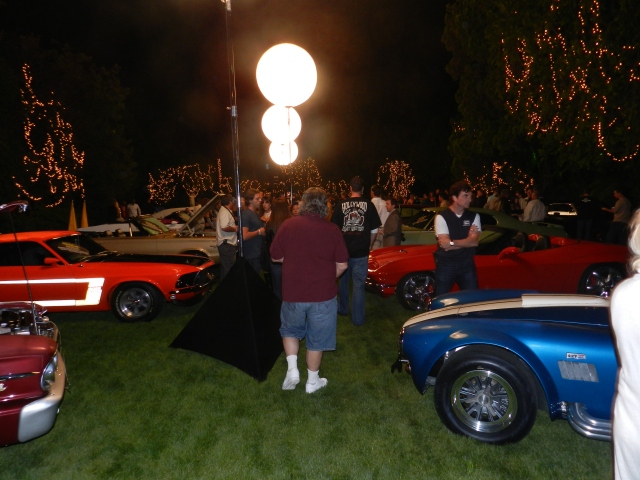 In this story the cars are also characters.  Each one mentioned here has its own back-story of conflict, passion, desire and enough secondary characters to fill a book like The Brothers Karamazov.

First up is my second favorite car of the show (obviously Murray’s is my favorite), Angrier, a 1969 Dodge Daytona Charger Tribute that won Hemmings 2010 Muscle Machine of the Year.  I have always had a fondness for Chrysler’s winged warriors, something that couldn’t be helped because I lived in the Carolinas in the late 60’s.  I even remember riding my bike to the local Dodge Dealer and drooling over a particular example they had sitting on the lot for many months, seemed no one wanted it.  Along with being infused with a love for old-time stock car racing from living in the south, I am originally from Germany so I have a healthy love of road racing as well (hello Porsche 917).  And apparently the owners of this winged menace have the same feelings as it has a road race worthy suspension underneath.  I love it!

Next up on my list of favorites is this beautiful 1967 Plymouth GTX Convertible originally owned by “The Mad Russian” Sergei Dannenbaum.  Mr. Dannenbaum was a well regarded racer and Chrysler engineer and originally used this car as a tow vehicle for his Max Wedge Drag Car.  As usual, I have a story about why I am fond on this car – my first car was a 1966 Plymouth Belevdere II which shares the body style with this GTX.  And Richard Petty drove one too. 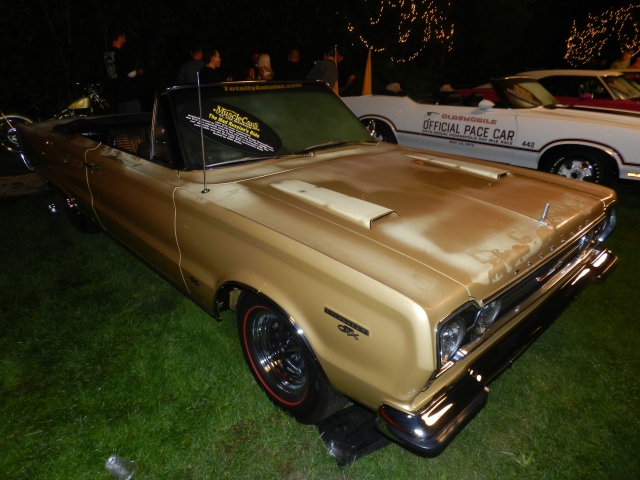 Fourth on my list is a nod to my daughter who has a passion for pink cars.  She would be disappointed to find out that “The Pink Panther” did not have “hood pops” (her name for ram air).  It has a 440 six pack super-track-pack 4-speed so perhaps she wouldn’t care.

Just so you don’t think I am totally Mopar oriented, here is an awesome 1970 Ford Torino Cobra Jet.  Hard to believe this J-code 429 equipped car was found outside a burned down gas station in Tennessee where it had been sitting for years.  And the original parts including the Hurst shifter were still there. 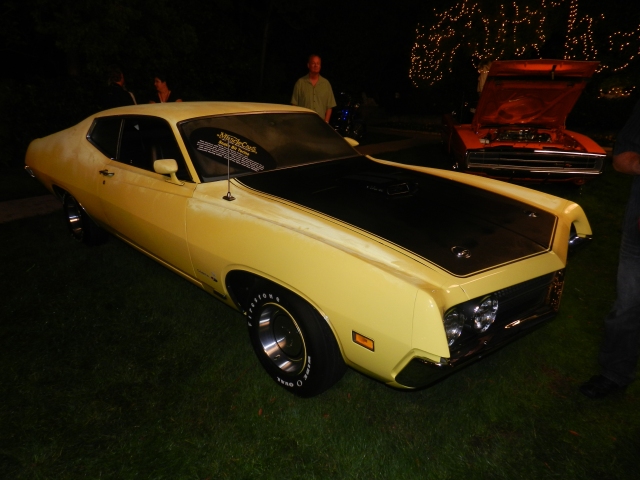 From yellow to Gulfstream Blue, this 1970 Shelby GT350 is one of only four cars produced with a close ratio 4-speed, limited slip and air conditioning.  And this one is signed by Mr. Shelby himself. 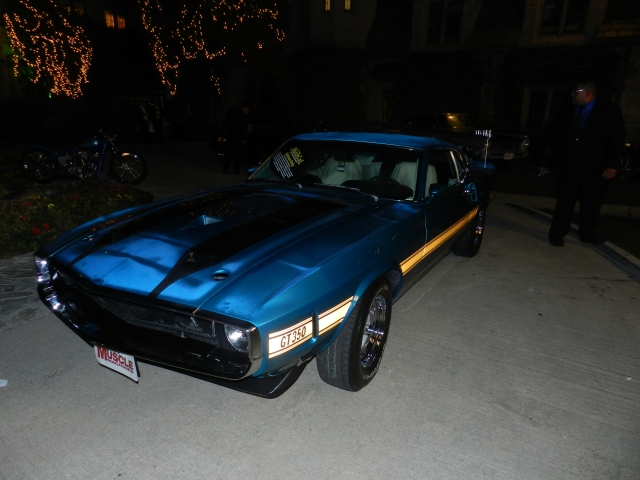 For some strange reason Muscle Cars at the Mansion also includes some motorcycles, and really, really nice ones at that.  My personal favorite was this 1970 Triumph Tiger 650 built by Elliott Grosshans.  I sat next to his father on the shuttle bus ride over – a prouder man did not exist on Saturday.  You should read this little excerpt of how the invite happened. 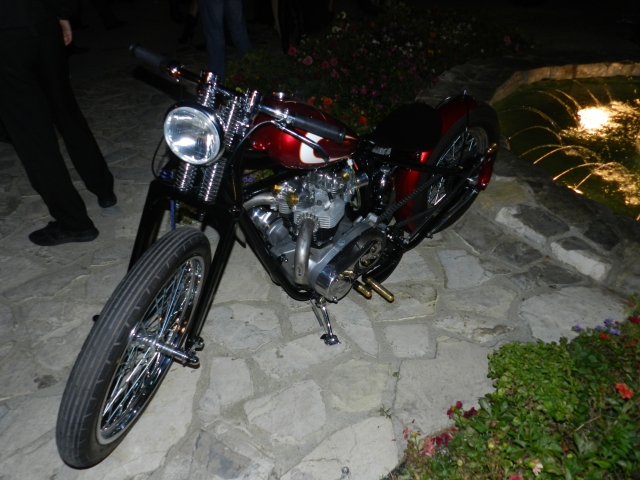 From Mopar to FoMoCo to GM, there was a muscle car representing almost every size and shape.  From GM we have a real Indianapolis Pace Car.  That’s right, not a replica sold to the public, but the actual #1 car that took the Unsers around the track for a victory lap.

Speaking of all shapes and sizes, there were other things of interest at the mansion.  The food was awesome, the bar was open and yes, there was a party.  The cast of main characters for this event has already been discussed – so what about the supporting cast?  I can only say that it was difficult for a few of us to pay attention to the house and grounds as our tour guide had a rather form-fitting dress (there’s that passion thing raising its head again).  Not sure which should get top billing but if you want to see a SFW (Safe For Work) pictorial of Ashley then click here.  If you want NSFW pictures you have to find them yourself.

Of course, not all the Playmates were in form-fitting dresses, there was plenty of traditional attire on hand as this rather happy party guest can attest (name withheld to protect the innocent).  While the outfits were original, I was told by a couple of the girls the new TV show “The Playboy Club” wasn’t.  Apparently a lot of the former bunnies are quite upset about their portrayal on the show.  Read more about that little drama here (back to the conflict).   I can only say that during my visit the Playmates and Bunnies were among the classiest women there. 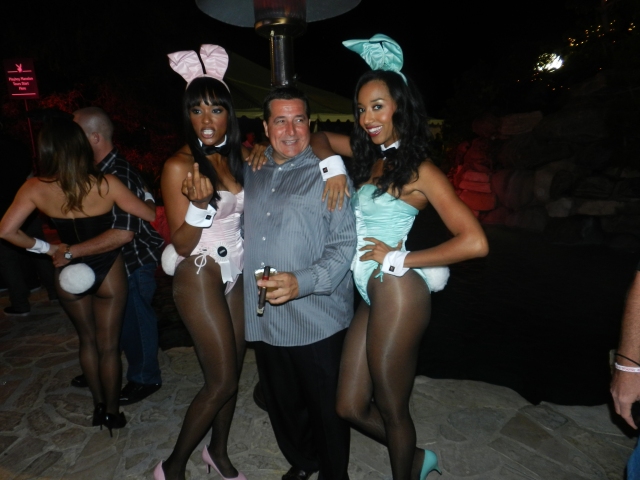 In the end no good party can function without good music.  I am quite partial to Rockabilly and was in luck, someone organizing the event must have the same taste.  If it interests you check out their Hall of Fame.

In closing today’s Part 1 of our story I have to admit to taking another artistic license.  This is not the end of the story of the 3 and a half year path of Murray Pfaff’s and his Imperial Speedster.  I hear a rumor it will be at SEMA in a couple of weeks.  Come back tomorrow to read about how Murray has arrived at this special place and how his friends helped him get here.

Frank Schwartz is the founder of CarFriend.me and Advanced Automotive Consulting Services, partner in The Middlecott Sketchbattle Experiment and serial entrepeneur. A long time automotive enthusiast, Frank started reading car magazines at the age of 8 and has spent 30+ years working inside the automotive industry. In his spare time Frank races with the Sports Car Club of America, spends time working on his numerous project cars and supports many local charities.
View all posts by Frank Schwartz →
This entry was posted in On The Road and tagged 1967 Plymouth GTX, 1969 Dodge Daytona Charger, 1970 Dodge Charger R/T, 1970 Ford Torino Cobra Jet, 1970 Oldsmobile 442 W-30, 1970 Shelby GT350, 1970 Triumph Tiger, Ashley Hobbs, Elliott Grosshans, Imperial Speedster, Its All About the Kids, Murray Pfaff, Muscle Cars at the Mansion, Playboy Playmates, SEMA, The Playboy Mansion. Bookmark the permalink.