In case you missed it, last Friday the Michigan Chapter of IDSA held their annual conference featuring distinguished designers from around the country.  The theme for this year’s event was We All Share the Road, which means we got to hear from not just the automotive side of things, but also from aircraft, trains and even forklifts!  Before I get into a few of the more interesting comments I’d like to thank Jeevak Badve and the rest of the IDSA volunteers for the extra (and often thankless) effort they put in to make these events happen.  If you have never been I would highly recommend it as it is at various times insightful, thought-provoking, funny and there are relatively few chances at a free lunch in Detroit anymore.

I was a little concerned when the first presenter immediately admitted she wasn’t either a designer or a car person.  But as it turns out, Sheryl Connelly, Ford Global Consumer Trends, had little trouble getting everyone’s attention with her passion for her job and comments about the future.  This was in evidence as the issues she raised of information and physiology showed up in questions to other presenters throughout the day.  One thing I found interesting was Ford’s approach to the future did not necessarily involve predicting trends, but looking at a range of scenarios and seeing how their strategies and future product plans respond to each scenario.  And I can see her comments about how Information carries with it a sense of reward, is seen today as a status symbol and the addiction it can lead too every day as I look at how my kids (and some designers) use their phones.

Mike Donoughe, COO of Bright Automotive, formerly of Tesla and Chrysler, had a lot to say about automotive culture and how all the disciplines can and should work together.  I really enjoyed his analogy of football versus football to describe the different ways businesses accomplish their objectives.  Football (soccer to some of you) was described as this fluid slurry of activity ending with this sudden strike on goal (click here for a quick laugh Gooooaaaalllll!) which is great if you have a high degree of certainty of hitting the mark but “you are screwed if you are off the mark” (no offense to German business strategists).  American football is more like “a bunch of people get together and make a plan, try it and say ‘that didn’t work, now what?’”  In this environment the people and company are very flexible but you have to be ok with a high rate of failure.  His comments during the Q&A session about being 80% correct requiring only 20% effort and the final 20% of certainty takes 80% of the effort may not be new, but his discussion of weighing execution risk versus market risk was insightful and very succinct.

Next up we were treated to a presentation by Klaus Busse, Director of Interior Design at Chrysler.  Klaus is the best evidence that us Germans do have a sense of humor (you can just imagine the picture of his first trip to the Texas State Fair wearing a pink polo and white shoes) and he used it to keep our attention as he discussed some important changes at Chrysler – like how a simple commercial rediscovered the soul of the company.  I found this article’s comment that jokes have to be explained to German Chancellor, Angela Merkel especially funny considering she was the brunt of a good one during Klaus’ discussion (you had to be there).  An important part of his conversation was that in the time of “green”, there is still room for luxury, even as the definition of luxury is changing. 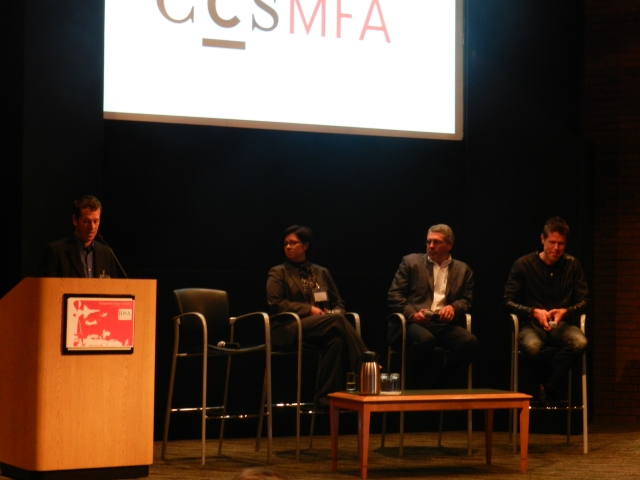 After a nice (and free) lunch we were back to the presentations with John Rogers, President, CEO and Co-Founder of Local Motors.  I have followed this company since its inception because I am really intrigued with the whole idea of crowd-sourcing.  I have to admit, though, that I may have had a misunderstanding of Local Motor’s objectives here as I figured the whole idea was that the group is smarter than the individual.  John explained during the Q&A session that his idea is more about finding that one guy with a great idea who can’t get it heard.  John also discussed some things he saw happening in our industry like the separation of the powertrain (i.e. being produced by outside suppliers) and how regulation kills innovation. 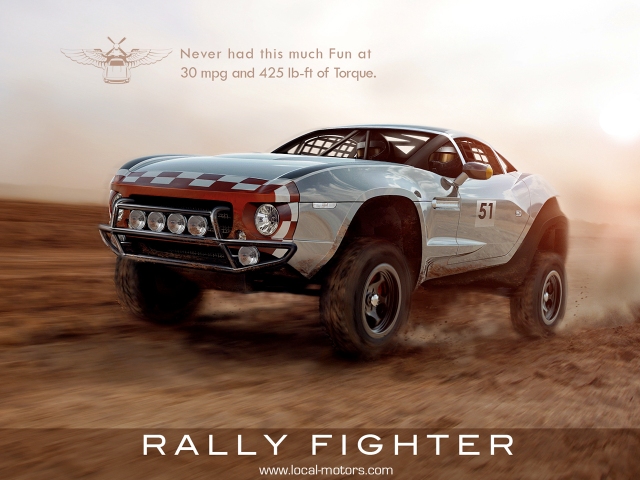 Enough with automobiles as Ken Dowd of Teague, the Design Firm founded by Walter Dorwin Teague back in the 20s, gave some insight into the design of the interior of the new Boeing Dreamliner.  Although I am fast approaching a million miles of air travel, I have never been fond of the aircraft experience, however I am looking forward to my first Dreamliner flight based on the stuff in Ken’s discussion.  Ken talked about how this is a common experience, no one is a big fan of their last flight but everyone remembers their first flight.  Unfortunately I was a child and transatlantic travel in the early 60s meant a rather cramped long narrow cabin in a Boeing 707.  The Dreamliner features a fuselage of around 19 feet (compared to 12 feet on a 707 – talk about a cigar tube) and perhaps the most interesting features are the spacious entry foyer, the fully adjustable LED lights and larger windows that are located higher in the fuselage so more passengers can see the horizon.  The horizon also features in the exterior graphics of the plane. P.S. if you have never seen an aircraft brochure, check this out.

If talking about aircraft in Detroit was a unique, Fork Lifts were the most surprising topic of the day.  But Steven Pulskamp managed to make even something as mundane as a lift truck interesting.  Who knew Forklift Companies spent this much time and effort on Fork Lift design (no offense intended).  Some of the products Steven showcased were absolutely brilliantly conceived.  I was especially intrigued by the whole re-purposing part of their EcoLogic program, where old forklifts are purchased, refurbished and resold.  I remember many years ago investigating this idea for automobiles when Bill Leggett started AIR.  What a brilliant idea and as “green” as they come.  Steven also had perhaps my favorite line of the day.  In describing a Design Brief he once received from a boss, Steven said all he got was “I want the operator of this forklift to grab the handle and go ooohhh”.

The presentations did not just cover North America either as Richard Vaughan of Visteon described his experiences in India.  Visteon partnered with 3M to do some market research on Growth Markets where they conducted 3336 vehicle evaluations by 556 consumers in Delhi and Bangalore.  Wow – although I am in the Market Research field myself this does not sound like a lot of fun.  Richard also talked about Perceived Quality – those visual cues that communicate quality.  For example why does PolyPropolene (PP)  in a Chevrolet Cruze appears cheaper than PP in a BMW? (inquiring minds want to know).  Actually, Visteon has developed a scoring matrix for Perceived Quality for Interiors that they use to help designers decide which cues to put into a component design and help automakers in general make content decisions.  Valuable stuff.

From Cars to Aircraft, then off to India and back to North America and RV’s.  Robert Riggs spent some time describing the new way of designing Monaco’s new Vesta line of motor coaches.  The new Vestas feature aero improvements that allow them to reach 18mpg whereas a normal RV may only get between 10-12mpg.  Something I had never thought about was the fact that RV’s are designed from the inside out.  Like a house, ergonomics and layout are very important.  First you have to design the floorplan which then leads you to the exterior. 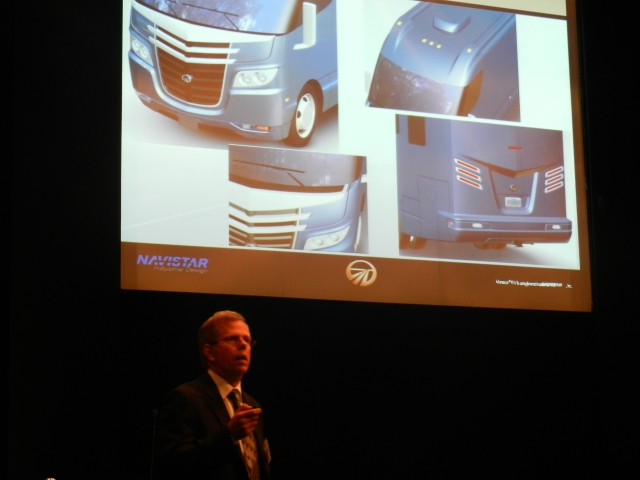 The day’s sessions came to a close with Larry Erikson and a discussion on some local transportation design history.  For example, did you know that the 1919 Motor Transport Corps Convoy had a lot to do with today’s Interstate Highway system?  At that time “practically all roadways were unpaved from Illinois through Nevada”.   How about traveling cross country with a 6.9mph average speed?  And then there is our local favorite conspiracy story, the Detroit Street Car Conspiracy.  Did you know that GM used to design buses and trains?   The advent of these diesel-electric trains is especially interesting and actually had an impact on architecture.  Because of them the stops that Steam engines made at local stations to refuel were eliminated and many of those communities were bypassed.  How about the fact that Alfred Sloan did not want to compete in the basic transportation market, he considered that best served by the used car market?  Finally, Larry discussed the whole idea of vehicle ownership expanding worldwide and how that may or may not translate into ideas like small single occupant cars and car sharing.  Personally I agree with Larry’s point that there must be something about “possessing things” and ideas like “pride of ownership” driving car sales regardless of density and infrastructure issues.  Larry presented a great slide that supports the idea car sales increasing as income increases, regardless of outside factors like geography.

So there you have it, IDSA’s whole list of speakers in a nice easily digestible form.  Perhaps the best way to end it is with David Muyres’ comments during the final Q&A session.  You have to ask the right question to solve the right problem and it appears designers are best equipped to answer the questions on the future of transportation.  Come back next week when I have a report from a very special top-secret location.