I should probably start the week off by answering the question “Who the heck are these  “DAADDS” I am talking about?”  For those who care, DAADS stands for Detroit Area Automotive Design Staff, and its my acronym identifying the design staff invited to the latest edition of DesignerNight at the Races™ (see picture below).  Obviously if it catches on, I will take full credit for coining DAADS, and if not I’ll find some way to blame it on someone else – let’s just call it journalistic license.  I guess using that explaination, the next DesignerNight at the Races™ will be held soon in Southern California for SCAADS.

Event #19 was held last Tuesday at Kart2kart in Sterling Heights Michigan and was sponsored by Lacks Trim Systems.  67 Design Staff registered and after the last minute clay reviews, bouts of flu, sick children and other assorted “excuses” more than 50 from ASC, Chrysler, Ford, General Motors, Tata and Toyota actually showed up.  If you didn’t cancel ahead of time and just plain didn’t show up (you know who you are) don’t worry, there were plenty of others who relished the result – your absence meant they got extra track time!  And the feel-good part of the evening is a result of not just those who attended, but everyone who registered – a check for $670.00 is on its way to The Barbara Ann Karmanos Cancer Institute thanks to your efforts.

For those who have never been, the event is an evening of competition and camaraderie centered around the celebration of automotive design, designers and their passion for all things automotive.  My firm AACS has a long history putting these events together and this is the 19th event since the first one in California in march 2006.  Some who attend never even race the karts, they just enjoy the opportunity to get together with former classmates and the “competition” to compare war stories about the overtime and Saturday work schedules that have become the norm in this industry.  Lacks Trim Systems recognizes the effort to develop awesome vehicles put forth by the design staff and has been a multi-year supporter of the event.

The doors opened last Tuesday at 5pm and even though the first kart on the track wasn’t scheduled until 6pm, the fact that there were 30 people already there meant we needed to start a bit early.  The first practice session ended with Ford’s ringer Loren Golden setting the first sub-29 second lap of the evening with a 28.441.  The second session saw two GM Designers joining him as Micah Jones ran a 28.155 and Casey Swasenger also got below 29.0 as well.  After a brief meeting outlining the events of the evening, introducing Lacks as the sponsor and talking a little bit about The Karmanos Institute, the food finally arrived and qualifying started with 52 drivers competing for a spot in one of 4 heat races. 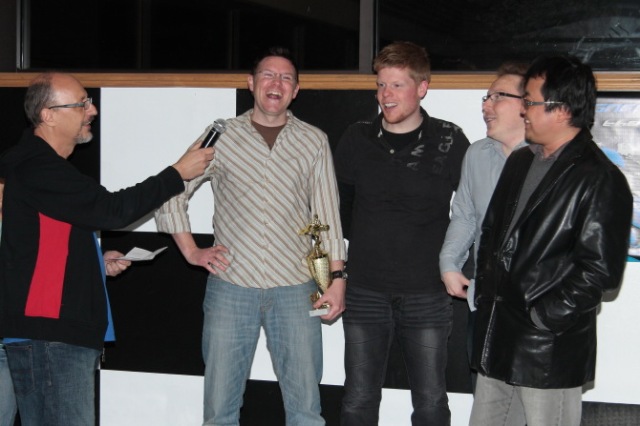 After qualifications were done a total of 11 drivers had turned in laps in the 28 second range led by Toshio from Toyota with a 28.141.  The Heat races started at 6:45 and the first race, the “D” Main featured many drivers from Toyota as well as a couple from GM and one each from ASC, Chrysler and event sponsor Lacks.  After starting 3rd, the race was eventually won by Ai Keskeny from Toyota.  The “C” Main followed soon after with the pole sitter Inque80 of GM (also know by his “stage name” Brandon Lynum) winning the race.  Chung Lee from Toyota also improved the most after finishing 5 pots higher than his 9th place starting position.

The “B” Main featured the Drive of the Night as yours truly started last and managed to finish 7th (ok, so to be honest we don’t have an award for “Drive of the Night” and even if we did, I probably don’t deserve it but since there is no one to object I am going to claim it anyways).  Nathan Dressman from GM also managed to improve 5 positions from his 10th spot on the starting grid.  The race was won by Ryan Blodi after having passed both Paul Aldighieri of Ford and Steve Schwartz of AACS.  But points for the Spinelle Cup are only awarded in the A Main and the almost the entire field had qualified under the 29 second mark.  Finishing in 3rd place was Daniel Bohman from GM, 2nd place and 6 points went to Toshio from Toyota and the winner was (as usual) Micah Jones who garnered 9 points for GM. 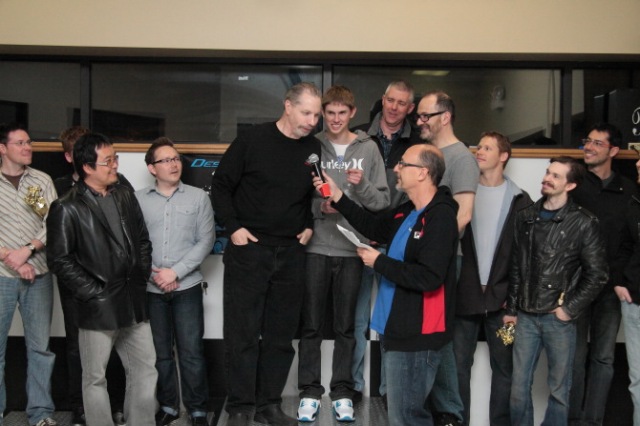 After the Heat races were done it was time for the Team Endurance race. Only 9 Teams took the field as several competitors had to go home early (some even had to go back to work).  It would take me an entire article just to describe the number of lead changes that happened during the race but in the end it was Ford Team #2 that took the eventual win.  GM teams finished 2nd and 3rd as General Motors retained the vaunted Spinelle Cup™ Trophy for another year.

In the end the event was a great success and we are looking forward to many more.  Many thanks to Tony, Jeff, Aaron and the staff at Kart2Kart for managing a great evening, my staff at AACS for all their hard work organizing such an event (Alison, Aaron, Steve and Joe), Ingo Rautenberg for the awesome photographes (photos will be uploaded soon) and to Mark and all the staff at Lacks Trim Systems for continuing to sponsor the evening’s festivities.  By the way, if you have a few bucks laying around (and let’s face it, who doesn’t?), take a minute and send a couple towards a local charity (my recommendation is obvoius).

Only 2 days after the Designer Night event, Lawrence Tech held their end of year Design Showcase.  This year was especially special for them as it was the first year for them to graduate students with a degree in Transportation Design.  Look back here in a few days for a report of that show.

Frank Schwartz is the founder of CarFriend.me and Advanced Automotive Consulting Services, partner in The Middlecott Sketchbattle Experiment and serial entrepeneur. A long time automotive enthusiast, Frank started reading car magazines at the age of 8 and has spent 30+ years working inside the automotive industry. In his spare time Frank races with the Sports Car Club of America, spends time working on his numerous project cars and supports many local charities.
View all posts by Frank Schwartz →
This entry was posted in Designer Night at the Races and tagged Designer Night at the Races, Karmanos Cancer center. Bookmark the permalink.