The Blog Title this week has absolutely nothing to do with beer recipes – If you want THAT website please click here.  And now for something entirely different (in the worlds of Ali G “Respect to Monty Python”), a report from a car show that isn’t about new cars.  It has been many years since I attended Autorama, and the one thing I can say about this year’s edition is that anyone who doubts the automotive passion of Detroit should know it still burns deep.  It had a great time, got to spend the day visiting some old friends, meet some new friends, and I even ran into “The Stud” while there (If you want to know who “The Stud” is read about him here).  I must say it is always fun to listen to his occasionally outrageous, sometimes caustic, but always honest comments about things automotive.  And he was in fine form last Sunday.  So read on to see what we saw… 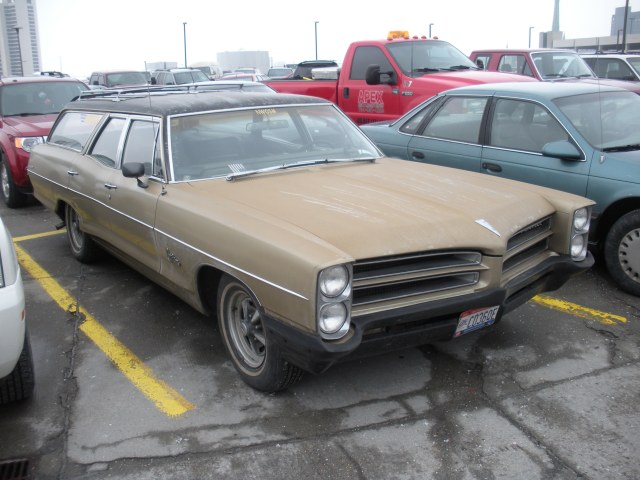 I arrived and was immediately found this gem of a wagon from Ohio parked on the roof of COBO.  As a kid I always thought these boats were behemoths (insert religious reference here), but it does not look that big compared to the Taurus next to it.  I don’t know about you guys and gals, but I kind of miss the old wagons, especially the old Pontiacs.  I have a sincere desire to have one of these one day, lowered like the one in this picture. SUV’s and Crossovers just don’t seem to have the same soul, although you cannot argue they offer some things a wagon cannot touch (like status).  But it is not like I am the only one who wants a wagon for daily use, there are tons of forums and clubs where people are screaming to bring them back.  OK, maybe not.  For example there is this post from 2002, where ‘jdbtensai’ mused  “Not popular enough for anyone else to write about apparently.”  It was a hot bed of conversation until the thread ended in 2005 when somebody mentioned drifting their Odyssey.  So maybe there is a reason hardly anyone sells wagons here anymore.

Easier to Park than a normal Imperial

But every one loves a convertible, right?  Just inside the main entrance I got a chance to meet up with Murray Pfaff and see his newest creation, the Imperial Speedster.  There is way too much that has been changed here for me to list it all – something close to 50 cuts were required.  If you are interested in reading more about the concept phase, check out Murray’s blog here.  Amazing considering this thing started as a 1959 Chrysler Imperial 4 door.  Later in the day when I saw “The Stud” he could not say enough positive things about the execution, but to him the car was just too short by about 6-8 inches (insert you favorite joke here).  Murray’s friend Ken Fenical of Posies says – “Anyone can restore a car, but it takes a real man to cut one up!”

Now, if you have never been to a custom car show then shame on you.  Suffice to say you will see a lot of vehicles you wished you owned, and just as many where you wonder what drug the owner was using when he built it.  The Stud summed it up perfectly when looking at this unusual Camaro  “Sometimes you run out of money and sometimes you run out of talent.  And then there are the times you run out of time.  But that one there? It looks like they ran out of all 3.” Apparently they built this one without doing any sketches first and were just trying to demonstrate their metal working skills.  Which by the way were very good.

I thought this modern interpretation of a Lead Sled was pretty cool.  Just the right amount of chop and lowering, overall an interesting car but I was not impressed with the “no-see-thru” wheels.  According to “The Stud” “there should be a lot of interesting shapes and finishes behind there but those mirrors behind the wheels makes it look like they didn’t finish that part”. The color combination also seemed a bit off – between the light and dark two-tone paint the chrome strip almost disappeared.  The great thing about bright chrome is the contrast.  It appears light on a dark vehicle and dark on a light one.

But the show is about more than just cars – there were some awesome vintage bikes scattered around the floor.  It is interesting to note that some of the design elements and color trends used in BMX in the eighties are still relevant today.  On this particular example from SE Racing you can see the name of Bob Haro front and center on the number plate.   After the show I spent a few minutes researching Haro online, I had no idea he is generally credited with inventing flatland tricks.  Haro later started several companies and today is the owner of Axio luggage.  SE Racing is still in business today, after being started by the “undisputed founding father of BMX”, Scot Breithaupt.

One of my favorite rides of the show was this 1963 Riveria, although I could have done without the square portholes.  What are the odds there would be two Riverias written about in the same blog post?  Does this signal the real renaissance of Buick?  I really liked the color scheme (even considering I am pretty color-blind) and thought the overall execution was clean and classy.  Overall I would be very happy to drive this one in the Woodward Cruise this year if the owner reads this column. 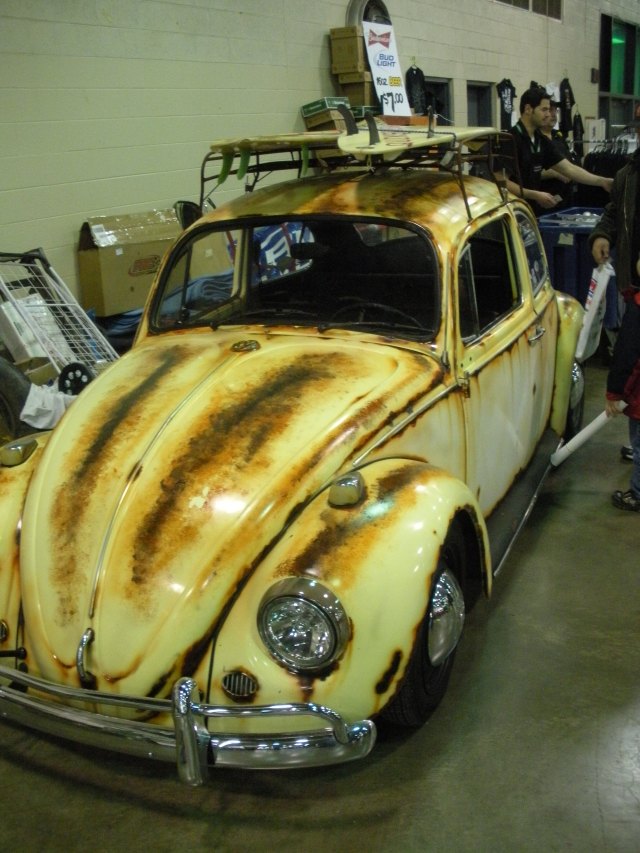 One of the more interesting cars in the basement was this Volkswagen.  While showing an old car with its original patina intact is all the rage these days, I was quite surprised to find the rust on this Volkswagen was AIRBRUSHED!  I thought this has to be a new idea but I even found a how-to webpage.  Who knew?

A Bright Ride from The LA Car Club

Speaking of airbrushing, “The Stud” caught me staring at this one for a while. “Just because you can airbrush, doesn’t mean you should” he whispered.

Too awesome for words

The basement was full of cool surprises like these two original cars from The Road Devils Car Club.  If you enjoy Vintage Pinups, check out their blog here. 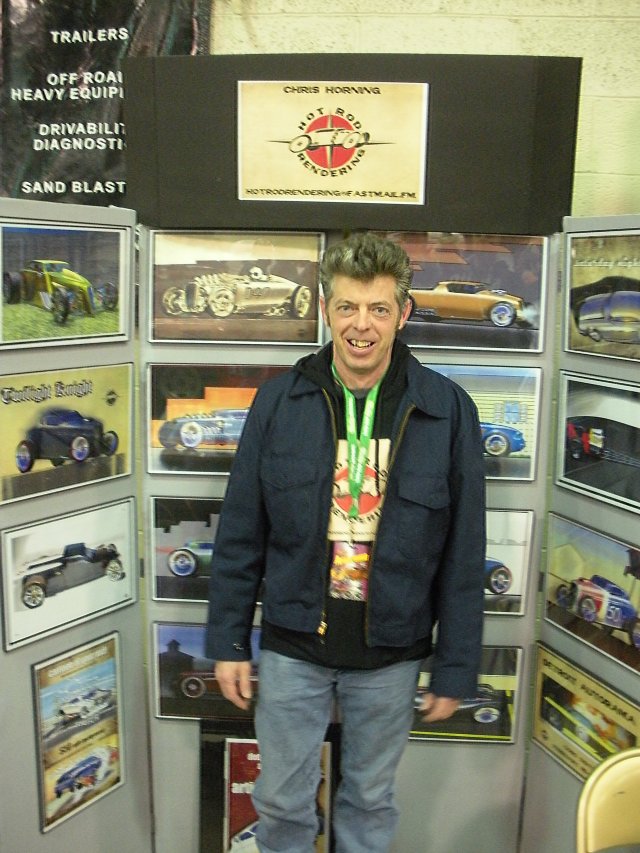 And speaking of all things vintage I found this item located in the basement. This was the first show of Chris Horning’s hybrid vintage/modern artwork and based on the traffic the results must have been pretty good.  I wish he had a webpage I could direct you to, but feel free to email him at the address on the picture if you are interested in any of the pictures you see. 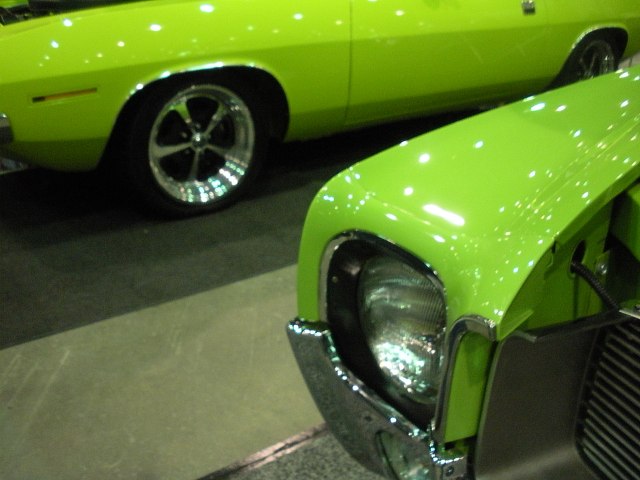 Can you identify the cars in this picture?

Back upstairs, I spent a good bit of time looking over the muscle cars.  I guess I am like a lot of other men my age, longing for one of the many 60s and 70s classic to be in my garage like some long-lost girlfriend.  Does anybody else miss seeing these colors on the street at a stoplight?

Last thing I did before leaving the show was to stop by and see the Spectre Werks Corvette Z06 GTR in the booth of Cauley Performance.  How about 0-60 in 3.9 seconds? Fast enough for you?  While there I got a chance to meet Jeff Cauley and chat with him for a few minutes.  Jeff couldn’t say enough about the new Ferrari 458.  It is undoubtedly the most remarkable car he has ever driver, as he described “leaps and bounds over the 430”.  It is “tame as can be, but be prepared when you put your foot on the accelerator”.  You can check out the 458 and the other cars he has for sale by stopping by their website or visiting their dealership on Orchard Lake Road in West Bloomfield.  Tell him The Supplier Blog sent you and perhaps he’ll let you take one for a spin (then again, he’ll probably just show you the door).

Last but not least, I should mention the Ridler winner for 2011.  At the time I was at the show, I did not know which vehicle had won.  But I did spend more than a few minutes admiring a 1956 Ford Sunliner with some awesome wheels.  Turns out I have good taste. 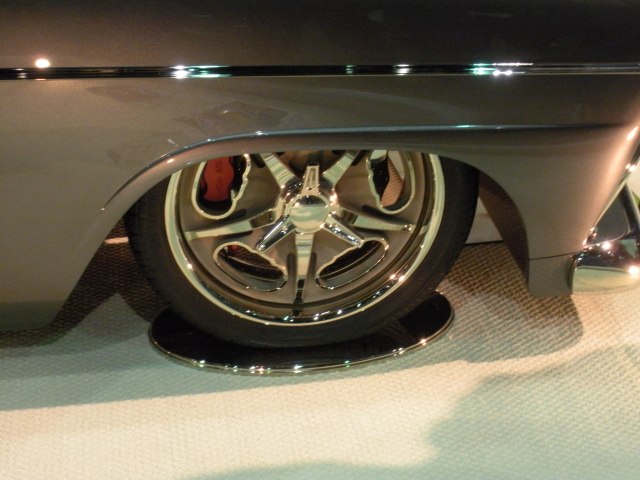 So that ends this report for the 2011 Autorama show in Detroit.  Next week I’ll have a brief report from the Geneva Show even though I won’t be there in person (thanks to a new friend who has some unbelievable photos to share).