2011 Detroit Pre-Show Activities: It’s All About the Passion

One of my favorite things about Auto Shows has more to do with the people than it does with the cars…… the Social Activity Calendar (i.e. “parties” for the uninitiated).   And if you know me, you know it’s not because I am a party animal as I always seem to leave early.  But because the thing I love about this industry is the relationships you get to develop with like-minded people, even if they are competitors.  Detroit, LA, Frankfurt, and SEMA in Vegas, they all have one thing in common;  the opportunity to spend time with some old friends you may not see again until next year’s event.  That alone is worth the price of admission (yeah, I realize that most of them are free to people in the industry).  So here is an overview of the places we went and the people we saw with the over-riding theme of Passion for what they do. 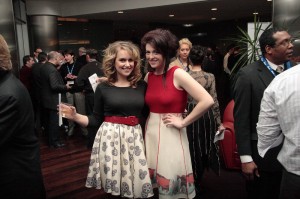 This year’s North American International Auto Show in Detroit started off Sunday night with a brand new event, The MAIN Event.  MAIN stands for Motorcity Automotive Industry Night and the goal for this year’s first event was to bring some design energy to downtown Detroit.  Thanks to host Compuware, the setting for the inaugural get together was their impressive campus downtown, and for my team-mates in pulling the event off in such a short time frame (thanks to everyone’s passion and a bit of madness).  The view was spectacular, from the fountain in the lobby to the chance to look down on the skating rink from the 15th floor.  I have to admit, I was very tempted to scratch my initials under the table in Peter Karmanos’ boardroom, but cooler heads eventually prevailed.  We were even treated to a fashion show by our own local Lezley Anne (you can see a gallery of some of her designs by clicking this link).  The evening was great, with a perfect afterparty at the Hard Rock, where an unnamed designer from the west coast kept us entertained with some outrageous tall tales (which unfortunately cannot be repeated here). 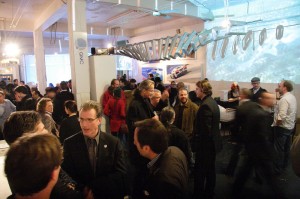 If the MAIN Event was the place to be on Sunday, the only place to be on Monday was Camillo’s studio.  A fixture at the Detroit Show, this year’s Designer Night Party was the 14th according to an article I read somewhere online (if I am wrong I welcome the correction).  Along with the food, fun and frivolity, I was able to spend a few minutes catching up with the only auto designer I know of who used to be a fighter pilot in the Russian Air Force.  Apparently some car companies will hire anyone (for a complete list of Russian Automotive Designers please click here).  I am not going to go into too much detail about the event as there are plenty of people posting their pictures all over Facebook.  But if you would like to read more you can always look up the NY Times article.  Speaking of passion, I would like to recommend the photography of Ingo Rautenburg, and thank him for allowing me to use his photographs here.  You can see his galleries of both The MAIN Event and Designer Night Party by clicking on the links.

To top off my week of events prior to attending the show itself, I always try to attend Autoweek’s annual Design Forum.  If the parties are the place to go to run into people you already know, I find the Design Forum the ideal place to meet new people in the design community.  I have to admit I miss listening to the presentations while sitting at large tables and making 10 new friends.  In 2006 for example I met a total car nut whose wife happened to be a jewlery designer.  A few months later I had a custom piece of jewelry to give someone special for their birthday (and let me tell you, I was a big hit that year!).  The CCS location is very nice and it does offer a better menu than the old Cobo site, but the smaller tables and auditorium style seating during the presentations provides a different vibe.  For whatever reason people sitting at the same table tend to introduce themselves, but when you sit in a row of chairs they are not likely to do the same to the people sitting around them. And it is a bit inconvenient to our out of town guests who did not have their own transportation. 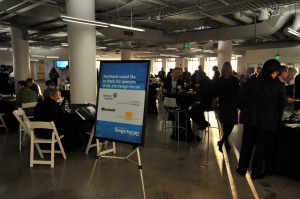 But the presentations themselves never disappoint.  This year we were treated to a very concise explanation of 4 mega-trends that will have a profound effect on our industry by Michael Warsaw of Johnson Controls; the emerging world, an aging society, alternative energy and the digital revolution.  Philip Lunn of Bunkspeed played magician for the evening by asking the question “What is real?”, all the while showing computer generated images that rivaled photographs  His warning to photographers everywhere that “Perception is Reality” hit home as I later had lunch with a photographer from Toronto (who also happended to be the son of a famous former Red Wing player). 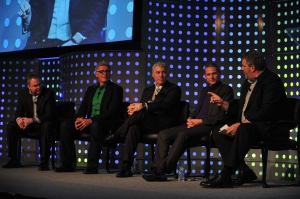 Frank Stephenson of McLaren Cars had perhaps the most interesting story I heard all week (it at least rivals the ones told at the Hard Rock on Sunday night).  It seems when he was in school at Art Center there was a very talented designer there on a full scholarship whose work really impressed Frank.  This student had to spend the evenings cleaning up and being the janitor as part of his scholarship requirements.  Frank was so anxious to learn how this student was able to make such great designs he offered to take over his janitorial duties if he would spend an hour a day showing Frank how to sketch.  If this doesn’t describe passion for your job, I don’t know what does.  I cannot wait for the proper opportunity to repeat this story to my own children.  And no, he never admitted who the student who taught him was. 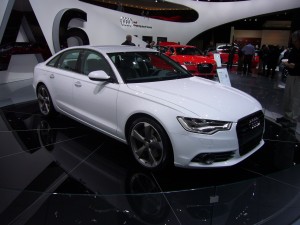 Finally, Achim Badstuebner spent some time talking about the things that lead to Audi design’s being the envy of most every design studio around.  Achim talked about the “Honesty of design”, that it is beautiful because it works, not because you have to sell it. He described Audi’s various products as different kinds of athletes.  The A models are the luxury athlete – elegant by nature.  The X models are the recreational athlete – robust in appearance and capability.  And finally , the R models are the competitive athletes – extreme and showcasing a tension like the muscles of an athlete’s body.  His passion for having fun in the office and his craft was readily apparent.

The event ended with a very entertaining look at the effort exerted to make the new Cars 2 movie authentic to the car culture.  Brad Lewis and Jay Schuster delivered a one-two comedy punch as they explained why the team at Pixar spent so much time making the world in a car’s image.  Even in something as simple as choosing which cars would play which characters, there was a depth of the decision process that borders on obsessive.  My favorites are the choice of the Gremlin and Pacer along with a Zundapp as the “bad guys.  Especially since I have a friend in Colorado with an unnatural (and some would say unheathly) obsession with making old AMC cars go fast that I can now tease to no end (like we weren’t all doing that before).  There’s that passion theme again.

Stay tuned tomorrow as we finally get to see some product from the show.  And be sure to return Friday for a show report from “The Stud”

1 Response to 2011 Detroit Pre-Show Activities: It’s All About the Passion